Herndon — Lucinda, a horse housed adjacent to Frying Pan Farm Park, was assaulted for the second time in the past three months sometime between the evening of Saturday, July 7 and the morning of Sunday, July 8. 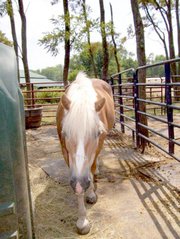 Lucinda, a horse housed adjacent to Frying Pan Farm Park, was attacked for the second time in three months over the weekend. The first attack was part of the animal slashings that resulted in the arrest of a 17-year-old male. Police are currently investigating the possibility of a connection.

Lucinda suffered wounds that police described as "non-life threatening" in the attacks. Previously, she was one of three horses attacked on the evening of April 26.

The suspect in the first attack, a 17-year-old male, is also accused of attacking two goats, a calf and a chicken sometime between the night of May 26 and the morning of May 27. The teen was arrested Saturday, June 23 and is currently in custody at the county’s Juvenile Detention Center, and is charged with four felony counts of maiming animals, three misdemeanor counts of cruelty to animals and two counts of unlawful entry.

Police said they are investigating the possibility that last weekend’s attacks are from someone that knows the 17-year-old in custody.

Anyone with additional information to provide or recalls seeing anything or anyone suspicious is asked to contact Crime Solvers by phone at 1-866-411-TIPS/8477, e-mail at www.fairfaxcrimesolvers.org or text "TIP187" plus the message to CRIMES/274637 or call Fairfax