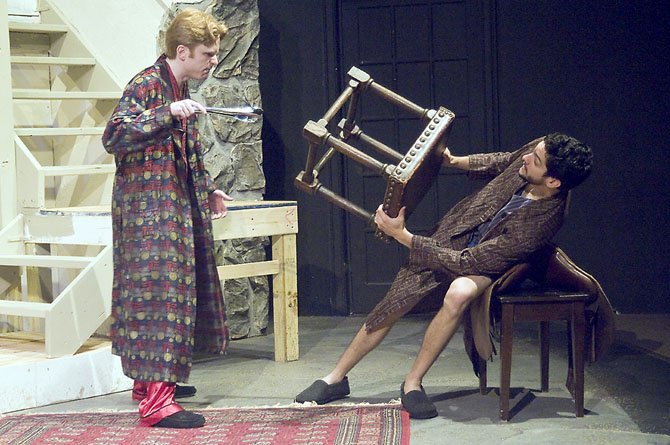 McLean — Members of the Marshall High School community, two teachers and five former students, created 1st Stage Theatre in 2008 in Tysons Corner with an eye on the future. They opened just as the first concrete for the new Tysons Metrorail was being poured, but also at the start of the economic recession. 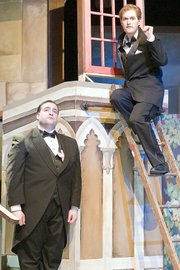 Matt Dewberry, left, as Jeeves, and Edward C. Nagle as Bertie Wooster, his employer, try to untangle a set of multiple mistaken identities in the musical comedy "By Jeeves" at 1st Stage in Tysons Corner.

"We’re drawn to firsts. It’s our mission to help emerging actors and designers to get their first experience with a professional theatre," said Eileen Mandell, managing director. "Our mission is all about first chances, and we‘ve survived these tough times by sheer, careful operation."

Mandell likes to say there isn’t a bad seat in the 110-seat arena, it just depends on the audience member’s preference.

"Some people love to sit in the front row, right at the stage, with nothing in between, others like to get more of the whole experience by sitting in the back and taking everything in," she said. "One man sits in the back row in the aisle seat for every show he comes to."

1ST STAGE is preparing for their fifth season, with a variety of shows designed to show off a wide range of type. "Suite Surrender" is a comical farce that pays tribute to the films of the 30s and 40s, while "Altar Boyz" tells the story of a fictitious Christian boy band. The shows also can take more serious notes, with an upcoming performance of "Never the Sinner," the story of the trial of murderers Nathan Leopold and Richard Loeb.

"We’re looking forward to another great season, and we’ll probably add in another children’s show as well," Mandell said. "We try and go with a loose theme for each season, and this one’s is spirituality. That’s not to say it’s going to be heavy, but there will be some heavy plays. ‘Never the Sinner’ is an especially thought provoking play that deals with a lot of tough concepts in the courtroom."

Before performances, the theater often hosts art showings when possible, curated by mostly local artists, and most of their shows feature local actors.

"Our theatre works like a teaching hospital. Young actors, students, interns, residents, at various stages in their development as professionals are given an opportunity to be surrounded, taught, influenced, protected by some very seasoned professionals," said Mark Krikstan, the artistic director. 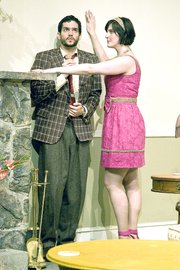 Joshua Dick (as Robert) gets his comeuppance from his lover (Katie Nigsch-Fairfax, as Jacqueline) in the farce "Don't Dress for Dinner" at 1st Stage in Tysons Corner.

THEIR WORK has already garnered some heavy praise in the theater community. Terry Teachout, the Wall Street Journal theater critic, gave them a rave review for their production of "Side Man" in April. Teachout said their production was deserving of comparison to the original New York production.

"1st Stage is not yet on the regional theater map, but the 100-seat theater in which it performs is both comfortable and well equipped, and the plays produced there are a shrewd mix of the surprising … and the sensible," he wrote. "Judging by ‘Side Man,’ 1st Stage is well on its way to establishing itself as a significant player on the Washington-area theater scene."

Becoming a significant player, as well as a more convenient, affordable, more accessible version of esteemed venues like the Kennedy Center, is what Mandell says they are shooting for.

"We want to be a part of Tysons’ future. The keyword for the future seems to be ‘innovation,’ and that’s what we’re all about," Mandell said. "We hope to be a new theater for this new city."

One of the ways the theater is garnering support from the community is their "Theatre-by-the-square-foot" fundraiser, where donors can underwrite a square foot (or multiple) of the theater for $20, which is the estimated cost per square foot per season to operate the theater.

1st Stage is currently showing a children’s play, "The Prince and the Troubador," which was written by two local playwrights. The show, which lasts about 45 minutes, is meant to appeal to children and their parents.

"They really know how to put on a show for the whole family. My wife and I thought the show was very witty, and the kids loved it too," said Meyers Brock of Vienna. "It was so creative of them to do the two programs, the kids loved theirs, and I think they’ll hold onto it as a memento from their trip here."

"The Prince and the Troubador" will be shown Saturdays and Sundays at noon and 2 p.m. through July 29.

The theater will also host a free reading this weekend of "Travlin’" a musical based on songs of the Harlem Renaissance of the 20s and 30s. Shows will be Saturday, July 21 at 8 p.m. and Sunday, July 22 at 7:30 p.m. Tickets are free, but must be reserved on the website.

More information is available at www.1ststagetysons.org.