Local coaches reflect on the law’s impact and societal changes. 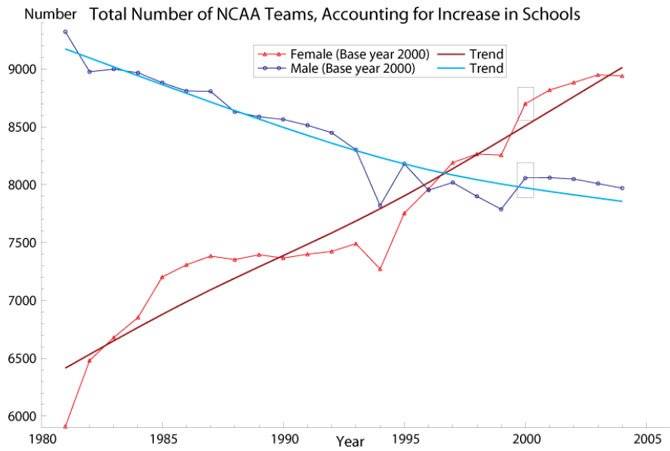 Forty years ago on June 23, President Richard Nixon signed into a series of amendments known as Title IX that banned discrimination on the basis of gender in "any educational program or activity receiving federal financial assistance." However, the law is mainly known for its impact on high school and college sports.

"Title IX is one of the most important statutes ever passed by Congress. It transformed access to educational opportunity for women in the U.S. Many people don't realize that Title IX applies not merely to sports but to access to all educational opportunities generally, when financed in whole or in part by federal dollars," according to W. Burlette Carter, a professor of law at George Washington University Law School. "Before it, women were blocked by gender stereotypes and Old Boy networks from a whole host of programs at high schools and colleges and universities."

Beth Prange, the head coach for the girl’s field hockey team at Washington-Lee High School, said that there have been "a lot of changes since I was growing up" in terms of opportunities for girls in sports.

"When I was in high school, there a lot of stigma attached to playing sports as a woman, so a lot of women didn’t do it. In my high school, it was pretty much the same girls on every team. If you played one sport you played them all."

In the years after Title IX, more and more women were playing sports in high school and college. This included women like Beth Ann Wilson, head coach of the women’s volleyball team at Marymount University, who didn’t really "recognize the disadvantages that women had in athletics" when she was growing up in the ‘70s.

"By the time I was in high school and college, it was the early ‘80s, and I think a lot of the positive effects of Title IX had already taken effect. So I always felt like I had a lot of opportunity, but I think I was at the very front end of that wave of women," said Wilson.

However, critics of the law believe that while women have made much progress in athletics and education as a whole, Title IX has meant many men’s college sports were cut due to schools being unable to comply with a three-pronged test set up by the Department of Education’s Office of Civil Rights to show that they are compliant with Title IX.

The three tests are: Showing that participation in sports programs for men and women are "provided in numbers substantially proportionate to their respective enrollments," "showing a history and continuing practice of program expansion in response to the interest and abilities of the ‘underrepresented’ sex," or "demonstrating that the interests and abilities of members of the ‘underrepresented’ sex have been fully and effectively accommodated by the school’s program."

According to Vicki Alger, Ph.D, a senior fellow at the Independent Women’s Forum, a non-partisan educational and research organization, says that the reason many men’s collegiate athletics teams have been cut is because women make up the majority of students at most colleges, and the proportionality test is most commonly used to show compliance with Title IX.

"A lot of schools default [to proportionality] for security purposes," said Alger. "The practical effect of the vague language, however, means institutions attempt to comply in the clearest way possible to avoid lawsuits for non-compliance. This means schools do cut back on the number of teams or players to meet proportionality guidelines."

However, Neena Chaudry, senior counsel for education and employment at the National Women’s Law Center, a legal advocacy group, says that the blame for Title IX is "misplaced."

She points to a fact sheet compiled by the NWLC that states that Title IX doesn’t require schools to cut men’s sports, saying that "Some schools have chosen to eliminate certain men’s sports, like gymnastics and wrestling, and even some women’s sports." It also cites a 2001 study from the federal Government Accountability office that found that 72 percent of schools that added teams from 1992 to 2000 did so without discontinuing any teams.

However, Alger points to data that shows from 1981 to 2005, the number of women’s teams in the NCAA increased while the number of men’s decreased.

Alger believes that the ambiguity of the law could be solved if the proportionality test were replaced with an interest survey given out by schools that would determine how many students at that school would be interested in playing sports.