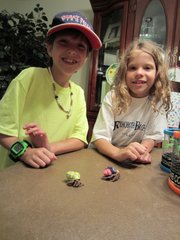 One evening my mom, my sister Rose and I were walking on the boardwalk at the beach and we saw a lot of people walking past us with interesting pets. We asked one person where they got it and they said at the store farther down the boardwalk. We thanked the person and started walking toward the shop. When we got there we discovered that they were selling hermit crabs. They all had different designs on their shells. The saleslady told us how to take care of them and my mom decided to get two, one for Rose and me.

To take care of hermit crabs all you have to do is: 1. Most importantly, get a sponge and keep it wet at all times. The hermit crab needs it to drink. 2. You should get a container of food that lasts 3 to 6 months and feed it to the hermit crab every morning. 3. Clean out the cage using a squirt bottle. Make sure in the bottle you only have water.

I chose a hermit crab that was colorful and named it Tie-die. There are colors on my hermit crab like purple, orange, green, yellow and blue. Rose has a hermit crab that is named Hermy. She named hers Hermy because she couldn’t think of a name for a yellow and grey striped crab. Hermy is much smaller than Tie-die. I don’t think they like each other very much so if you get more than one hermit crab you should probably get a cage for each crab. Sometimes you should let them out on a grassy or hard area where they can walk.

Today we had a babysitter and she suggested that we have a hermit crab race. So we did. The race was on! Tie-die moved out of her shell, Hermy was still in his shell, not moving. Tie-die crawled toward the food. Hermy finally moved out of his shell. Halfway to the finish line, Tie-die was in the lead. Close to the finish line Tie-die went back into her shell. She was afraid for some reason. Hermy was now getting closer to Tie-die. Rose was getting excited. Hermy passed Tie-die, but then Tie-die came back out of her shell and started after Hermy. The winner … Tie-die! She came right in front of Hermy. The race was finished. Rose, the babysitter and I were cheering. What a close race. Maybe tomorrow we’ll have a rematch. Whoever wins gets to have extra food for a week.