Arlington — Early last week, the cast and crew of the American Century Theater’s upcoming summer play went into rehearsals on site in Theatre II in the Gunston Arts Center. The play, Marathon ’33, relives the phenomenon of the dance marathon. In hopes of winning prize money in these endurance contests staged during the Great Depression, participants kept moving (dancing, walking, shuffling or even sprinting) for days on end.

On Tuesday evening, 1930s-era costumes designed by Rip Claassen were still being altered for the dress parade on Friday evening. Claassen was delighted with the timeframe of the production. A few years ago dresses and clothes from that era had been in fashion, with a few alterations, many will work well.

The producer, Rebecca Christy has done her homework, researching local papers for ads, notices and just local current events. After spending hours at the Arlington Central Library, Christie recreated pages from the 1930’s Alexandria Gazette. She noted that the day Franklin Roosevelt was inaugurated President, the Gazette only featured the event in a small two column piece while running local issues on the other three. The paper was rich in local news and events.

Tuesday evening the cast went back onstage into act 2, the tap dance contest followed by another 50 minutes of dance and a dynamic sprint around the dance floor.

The show opens July 27, 2012 and runs through Aug. 25. For more information visit www.americancentury.org 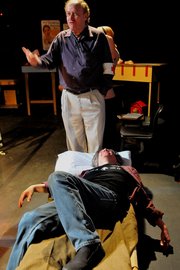