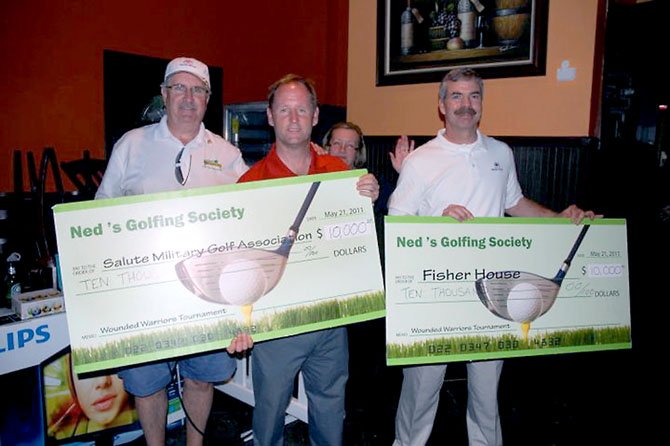 Herndon — Ned Devine’s Golfing Society will host their second annual golf tournament to benefit wounded warriors Sept. 22 at the Herndon Centennial Golf Course. The society, a 501(c)7, is based out of Ned Devine’s Irish Pub in Herndon.

"We play every month at a variety of local courses, and for the last 10 years, we’ve probably donated $2,000 to $3,000 each year to the Fisher House," said David Lewis, captain of the society. "Last year, we decided to go big time, and really show them some support."

The Fisher House Foundation maintains a network of housing on military bases, so families of wounded warriors and other service members receiving treatment will have a place to stay near their loved one. There is at least one center at every major military medical center, and according to the foundation, they provide more than four million days of lodging for more than 17,000 families every year.

"Last year we raised about $20,000, with about six weeks of planning, and donated about 90 percent of it to Fisher House," Lewis said. "This year, with better planning, we plan to donate more than 90 percent, and we’re aiming to raise $40,000."

Last year, the tournament featured 80 players and 17 wounded warriors. The society provided a luxury coach to transport the service members, as well as hosting a special prize for them at each hole, which will also be the case this year. Lewis said they expect about 30 wounded warriors this year.

"The whole day is about them," Lewis said. "They’re the most important people we have, people who sacrificed a lot for this country, and it can mean a lot to just get them out, golfing in the regular world again."

Ned Devine’s owner Graham Davies and General Manager Gordon Masterson will host the wounded warriors who will be treated to golf, lunch, drinks and dinner, all of which will be covered by donations and sponsorships. Prizes will be awarded to them for long drive, closest to the pin and more, and prizes will include rounds of golf, golf lessons and gift certificates.

"Every single dollar beyond our costs will go to Fisher House, the Salute Military Golf Association and to Operation Second Chance," Lewis said.

More information can be found by emailing Lewis at davejlewis2001@yahoo.com.