Seeking A Sundial at Observatory Park 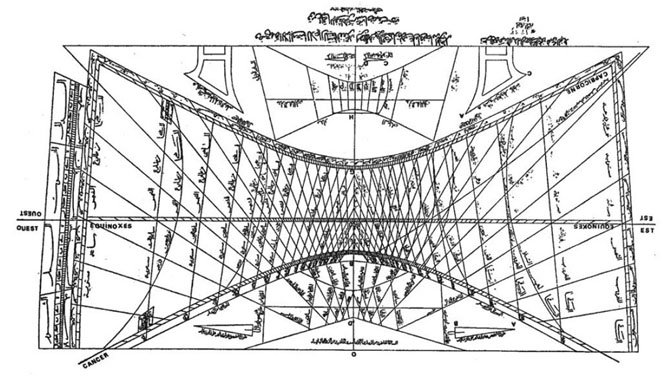 A design of the sundial at the mosque in Damascus, which the Analemma Society hopes to fund a replica for Observatory Park at Turner Farm. Photo Contributed

Great Falls — In 1371, Arab astronomer Ibn al-Shatir constructed a sundial at the Great Mosque in Damascus that was a pinnacle of scientific achievement. Almost 650 years later, members of the Analemma Society of Great Falls are hoping to bring a replica to Observatory Park at Turner Farm.

The society, which seeks to raise awareness of science through astronomy, will host sundial designer Roger Bailey Wednesday, Aug. 15 to help raise funds and awareness of their project.

Roger Bailey (right), a designer of sundials, will lecture in Great Falls Aug. 15 to raise funds for one to be built at Observatory Park.

Bailey is a retired engineer and secretary of the North American Sundial Society. He also serves as principal of Walking Shadow Designs and recently installed a replica of the Ottoman Sundial, which was built in 1480 in Istanbul at the Missouri Botanical Gardens in St. Louis.

"Timekeepers like Ibn al-Shatir in the major mosques like Damascus and Cairo were learned astronomers and mathematicians as well as skilled craftsmen," Bailey said. "They defined the science and created the instruments to measure time based on a new appreciation of the universe. All this was in addition to their roles as timekeepers, ensuring Muslims prayed at the times directed by Muhammad and towards Mecca."

BAILEY SAID the al-Shatir sundial represented many firsts in the field of sundials. It was the first with a polar gnomon, the part that casts the shadow, which was directed due north. It was also the first sundial to not change the hours through the progression of seasons, as others would change with the times of year.

"Day and night were broken up into 12 hours each, which meant that in the summer the hours were longer, and in the winter they were shorter," Bailey said. "But this sundial showed hours of an equal length. It also showed all five Muslim prayer times, some directly from shadows and shadow lengths, but also indirectly for those before sunrise and after sunset by reference lines."

Bailey’s talk will be about the design, the challenges that he will undertake by replicating it, and its place in the scientific advancement in the Islamic world during the 13th and 14th centuries.

"It marks a huge technological change and advance in science, mathematics, astronomy and culture in the Islamic world. We’re used to seeing things from the Western point of view, but back then they were way ahead of us," he said. "This sundial is a complex instrument that demonstrates what they knew about the order of the universe and when they knew it, in 1371, just as the Dark Ages were brightening in Europe."

Jacque Olin of the Analemma Society said this will be the second sundial in the Sundial Garden at Observatory Park. The Jamestown Commemorative Sundial was installed in 2007 to mark the 400th anniversary of the founding of Jamestown.

The society will also use the reception to speak about their future goals.

"At the reception Supervisor John Foust [(D-Dranesville)] and Analemma Society members will discuss plans for the roll-top observatory building which will be ready for use by 2013 and other plans for Observatory Park that are included in the Fairfax County Park Authority conceptual development plan for Turner Farm that will move forward in the coming years," she said.

THE TALK will be at 3 p.m. at the Great Falls Library, 9830 Georgetown Pike, and it is free and open to the public. The reception will be from 5 to 8 p.m. at Dante’s Ristoranti, 1148 Walker Road in Great Falls.

Reservations for the reception can be made by emailing Dr. Jeffery Kretsch at jkretsch@verizon.net, and more information about the Analemma Society can be found at www.analemma.org.