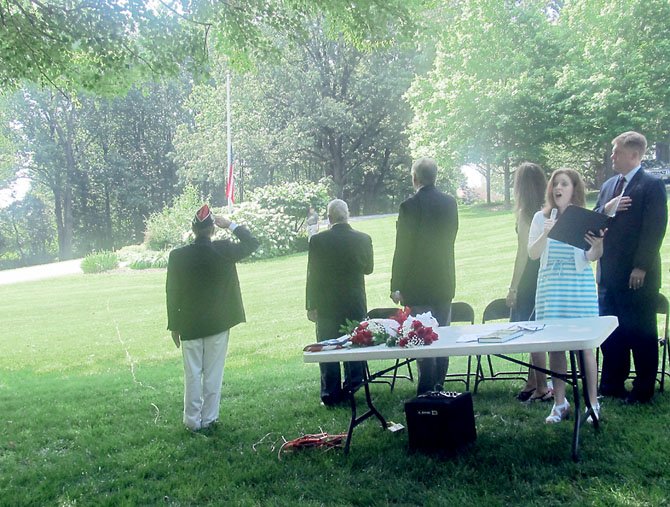 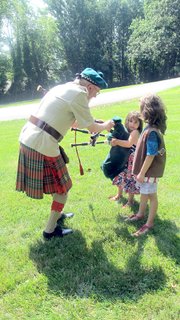 Norm Weaver, a member of the Washington Scottish Pipe Band, demonstrates how to play the bagpipes to sisters Ruby, 4 and Audrey Goldman, 8, after the 7th annual Burke Memorial Day Ceremony on the grounds of the Burke Centre Conservancy on Monday, May 28. 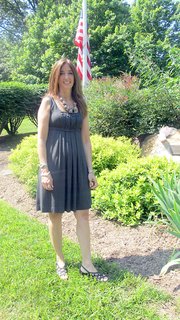 Del. Eileen Filler-Corn (D-41) "What I've told my children is Memorial Day is more than a day for barbecues, sporting events and the opening of pools. It's a day to remember those who have fought for our freedom and are unable to celebrate with their families today. It's especially great to see the Boy Scouts here, understanding the true meaning of the day and being a part of this important ceremony." 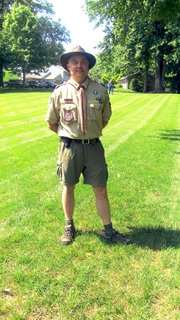 Phil Scruggs, Burke, Scoutmaster of Boy Scout Troop 1345 "Memorial Day is a day to be set aside to honor the veterans who fought and died to protect our communities."

Down a private road, just off the heavily-traveled Burke Centre Parkway, about 30 people gathered under the shade of a large Oak tree Monday to honor those who sacrificed their lives defending our freedoms.

The 7th annual Burke Memorial Day Ceremony, held on the grounds of the Burke Centre Conservancy and hosted by the Burke Veterans of Foreign Wars (VFW) Post 5412, included the Raising of the Colors by Boy Scout Troop 1345, remarks by local dignitaries and a welcome by VFW Post Commander David Meyers.

Speaking at the ceremony, U.S. Rep. Gerry Connolly (D-11) said Memorial Day was a day not only to remember those who "made great sacrifices in too many wars," but to remember the freedoms Americans enjoy because of those sacrifices.

"People are free to come up to any member of Congress and tell us what they think without fear," Connolly said. "We have the freedom to participate politically, the freedom of speech, the freedom of religion…"

Marsden noted that the origins of Memorial Day reach back to the American Civil War when groups decorated gravesites and gathered to commemorate the soldiers who died in the 1860s. "Those who died defending our freedoms need to be served as they have served us," said Marsden.

Cook said it was a day to say "thank you" and to show "gratitude and support to those whose sacrifices allow us to live in this great country." He applauded the members of Boy Scout Troop 1345, who were "learning to serve the community" by participating in the Memorial Day ceremony.

In addition to Raising the Colors, members of the troop lined Burke Centre Parkway early Monday morning with 50 flags, representing each state.

Retired U.S. Marine Corps Col. Larry Dickerson served as the guest speaker. Dickerson said it was fitting to personalize the day by remembering a friend or relative who died serving in the military. He recalled a close friend – John Bob Elwell - who died February 3, 1953 in Korea and who received the prestigious Navy Cross for extraordinary heroism.

"With his unit subjected to intense enemy small-arms and mortar fire during an assault against a heavily fortified hostile position, Private First Class John Robert Elwell fearlessly exposed himself to the devastating barrage to encourage his men and direct their fire," Dickerson said, reading from the official Presidential citation.

"When the unit advanced to within a few yards of the enemy trenches and was pinned down by a hail of small-arms and grenade fire from a nearby bunker, he single-handedly charged the emplacement and, firing his carbine and throwing grenades, completely routed the enemy from the bunker. While leading his fire team into the hostile trenches, he was struck by fragments from an enemy mortar shell and mortally wounded. By his exceptional courage, outstanding leadership and indomitable fighting spirit in the face of great odds, Private First Class Elwell served to inspire all who observed him and enhanced the finest traditions of the United States Naval Service. He gallantly gave his life for his country."

Dickerson and his wife then placed a bouquet of red carnations on the memorial stone as Terry Bradley, a bugler with VFW Post 5412, played Taps.