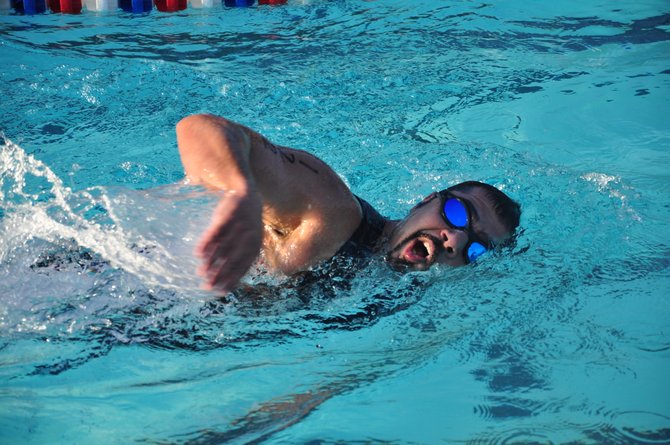 Robert Marzban competes in the quarter-mile swim, the first part of the Reston Sprint Triathlon Sunday, June 3 at the Lake Newport Pool. Photo by Alex McVeigh.

Reston — Eight hundred swimmers, cyclists and runners showed up to do all three the morning of Sunday, June 3 at Lake Newport Pool and the surrounding roads for the sixth annual Reston Sprint Triathlon. The event was hosted by the Reston Association and the CORE Foundation, which assists nonprofit fundraising. 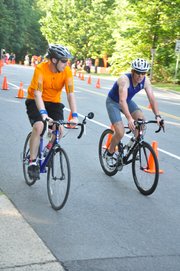 From left, Nathan Richardson and Koen Van Winkle ride during the cycling portion of the Reston Sprint Triathlon Sunday, June 3.

"It’s been an annual tradition for my family to come down for the past three or four years," said Chris Dobbins of Reston. "My brother ran in it for two years, and even though he’s retired, we like to come out and support the event, and cheer everyone along."

Triathletes began the day with a quarter-mile swim in the Lake Newport Pool before running into the parking lot, grabbing their bikes and cycling 12 miles. After their three laps around the course, the bikes were ditched and the event was concluded with a three-mile run.

"This was my first time putting together all three," said participant John Allen of McLean. "I’m a biker first and foremost and I like to run 5Ks when I can, but getting in the pool, especially to start was very difficult, and then you add another 15 miles of biking and running to it, it’s safe to say I’ll be feeling it this week."

Allen and other runners who didn’t have as much triathlon experience said the toughest part was working the transitions.

"It was tough going from being soaking wet and working on your shoes, clicking them onto the bike pedals and taking off, all while trying to keep moving and an eye on the clock," he said.

Deborah Lorber of Herndon came to watch a friend do the race, and she walked away from the event with a new respect for the athletes.

"I’m in awe of the endurance it takes to complete in three different types of race and put it all together," she said. "And it’s nice that this whole thing was to raise money for a good, local cause."

More information on the race, including complete results, can be found at www.restonsprinttri.org.