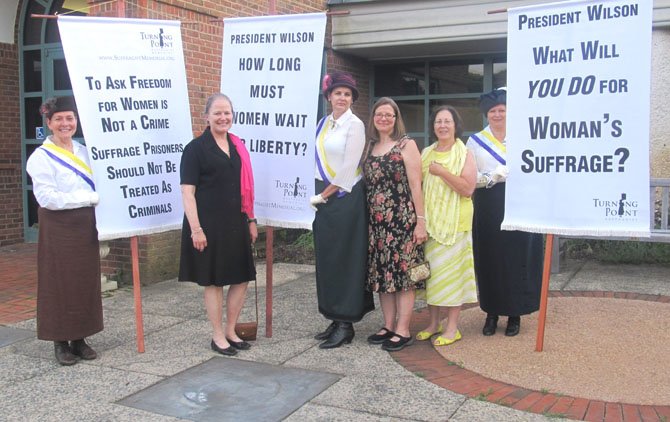 About The Turning Point Suffragist Memorial

The Turning Point Suffragist Memorial (TPSM) Association is currently fundraising for the creation of a $9 million memorial at Occoquan Regional Park in Lorton. The group is working with the Northern Virginia Regional Park Authority to see the memorial built before 2020, the 100th anniversary of the ratification of the 19th Amendment. Architect Robert Beach said the memorial will be located directly across from the former Occoquan workhouse. For more information, go to www.suffragistmem...

Some of the design features for the Turning Point Suffragist Memorial include:

*A memorial wall with 120 plaques for the women incarcerated for the cause.

*A footbridge into a memorial garden symbolizing the advancement of the movement.

For more information about the Turning Point Suffragist Memorial Association, go to http://www.suffra...">www.suffragistmem...g. 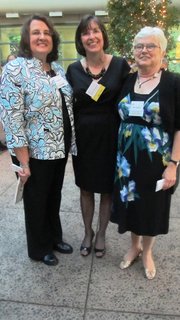 Jane Barker of Clifton, chair of the TPSM Association, stands with Nancy Lyons Sargeant of Lorton, marketing chair of the TPSM and 2012 award recipient Dr. Ann Gordon. Gordon was honored at the event, held at Meadowlark Botanical Gardens in Vienna on Wednesday, May 30, for her decades of research on suffragists Elizabeth Cady Stanton and Susan B. Anthony. 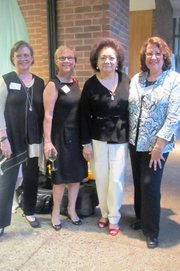 Women’s history was front and center in Vienna last week at a gala reception announcing the 2012 recipient of the Turning Point Suffragist Memorial Silent Sentinel Award.

More than 200 people, from local politicians to nationally-known journalists, attended the event held at Meadowlark Botanical Gardens on May 30.

Award-winning political reporter Eleanor Clift of McLean, a panelist for "The McLaughlin Group" and a contributing editor for "Newsweek," was the event’s keynote speaker.

"It’s great to be able to speak without being interrupted," Clift said to the crowd before announcing scholar Ann Dexter Gordon as the 2012 Silent Sentinel Award winner. "Her work will inform feminist scholarship for decades," Clift said.

A graduate of Smith College and history professor at Rutgers University, Gordon was recognized for her work editing the papers of well-known suffragists and early women’s rights activists Elizabeth Cady Stanton and Susan B. Anthony. Gordon has authored a number of other books about the history of the women's suffrage movement, and served as a consultant to Ken Burns' PBS documentary, "Not For Ourselves Alone: The Elizabeth Cady Stanton and Susan B. Anthony Story." Burns was unable to attend, but he served as the Honorary Patron of the event and sent a letter of congratulations. Gordon joined previous honorees Congresswoman Eleanor Holmes Norton and award-winning journalist and author Helen Thomas.

"The award honors women who exemplify the traits of women suffragists," said Jane Barker, chair of the TPSM Association.

"Here’s to Ann (Gordon), a not-so-silent Sentinel for the 21st century, keeping guard over our history and keeping Stanton and Anthony safe from obscurity or false interpretations," wrote ABC News’ Lynn Scherr, who nominated Gordon for the award.

State Sen. Barbara Favola (D-31) said she attended the event as a way to support the legacy of the suffragists. "Women today are standing on the shoulders of the courageous women who fought for the right to vote," Favola said.

Jane Hilder of Springfield, a member of the Fairfax County League of Women Voters, said suffragist history is still not well-known. "When I was in school, the story of suffragists was just a paragraph in the history books, a footnote to history," Hilder said. "I think what surprises people is that key events took place here."

The event was organized by the Turing Point Suffragist Memorial Association, which is planning a $9 million suffragist memorial in Lorton. "We want to keep history alive so that future generations know that women have done this, have been there," Barker said.

Barker said the memorial will honor the sacrifices of the "silent sentinels," more than 200 women who, in 1917, stood silently in front of The White House for months, carrying signs that read: "Mr. President, what will you do for Woman Suffrage? How Long Must Women Wait for Liberty?"

After months of escalating tension – and after 200 suffragists were jailed, beaten and force-fed at the Occoquan Workhouse – Congress passed the 19th Amendment on Aug. 18, 1920, which gave women the right to vote.

Occoquan Mayor Earnie Porta, a member of the TPSM board, said he frequently tells local visitors the story of the suffragists during tours of the Lorton area. "The memorial will give women today an appreciation of what it means to have a voice," Porta said. "It’s a memorial that’s long overdue."

"The whole story of the suffragist’s contribution to history is mostly invisible," said John Houser, manager of Occoquan Park, and liaison to the TPSM association. "I always say the suffragists are American heroes, not just heroes for women, and they just haven’t been given their due in our history books or monuments. We plan to change that. "