Forestville Elementary team brings back Odyssey of the Mind title in spontaneity. 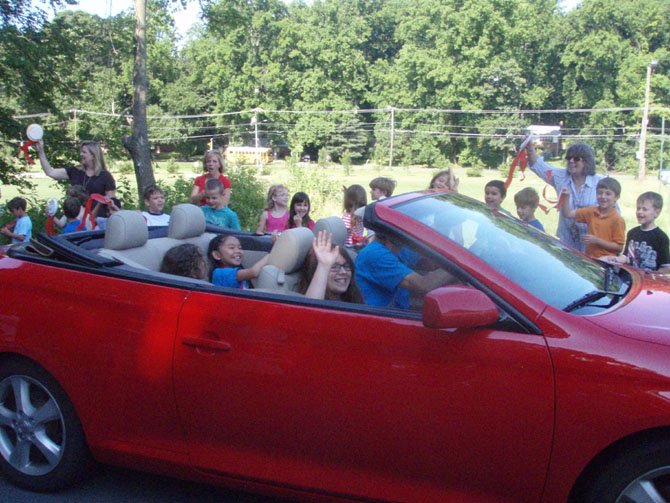 Sarina Bell, Sydney Pham, and Gwyn Murphy wave to their fans and classmates during the parade on May 31. Photo by Erin Hodge

The students of Forestville Elementary School lined up behind the school on Thursday, May 31, waving signs emblazoned with the word "Congrats!" written in every fancy lettering and color. Bumping and nudging one another, they weren’t just excited to be out of class that morning.

Three convertibles, "floats" in this parade, carried Forestville’s Odyssey of the Mind world champions around the corner to their classmates and fans. In the first car, Gwyn Murphy, Sarina Bell, and Sydney Pam; in the second, Daniel Silvestri and Caroline Keys; in the third, Lawrence Kang and Adit Khera. As each car passed, the team members cheered with their fans and classmates.

Odyssey of the Mind is a program that encourages students to learn problem-solving techniques by giving teams five competitive problems to solve in creative ways. Though teams are given weeks or months to solve these problems, they are also presented with a "spontaneous" problem at the competition. It is in this category that the team of seven Forestville students came out on top.

Before the competition, the students would practice two to three hours a week, Mondays and Saturdays. "It was fun," said Gwyn Murphy, a fifth grader on the team. "We got to hang out and laugh!" But they had to work hard, too.

"They really focused on the rules, making sure they had a full knowledge," said Jeff LeLoup, the team’s adviser and a teacher at Forestville. "The competition is graded to a hundredth of a point." But when it was the team’s time to shine, it all came down to creativity—solving the "spontaneous problem."

"We’re an awesome team," said Sarina Bell, a third grader on the team. "We knew we could win it all." Her confidence was reflected in her teammates, who laughed but nodded their assent. Their adviser agreed as well, if a little less brazenly.

"They weren’t any more creative that day than they were any other day," said LeLoup, in regard to his team’s victory. Their rehearsing and hard work paid off in their ability to be creative on the spot, earning them their world title."

Following the parade, in the time between celebrity and math class, the team was asked if they would do it all over again. They responded in unison, with a resounding "yes!"