Alternative House helps youth with no place to call home. 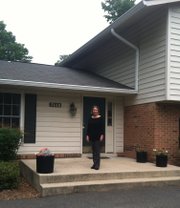 Judith Dittman in front of the Alternative House.

Driving up to the Alternative House, there is already a sense of welcome: as you enter, the walls are decorated with posters made by teens depicting their dreams and hopes for the future, like going to college, having a family, or finding the perfect job, the hopes and dreams that the house strives to help them achieve.

This month marks the 40th anniversary for the Alternative House and in the past 40 years the house has grown and changed.

The Alternative House started in May of 1972 by a group of churches in Mclean as a shelter for runaway teenagers. The churches found that the teens running away were trying to find themselves, so they began by putting the teens up in parish halls and volunteers’ homes. The churches found that need was much more than they could handle so they decided they were in need of a nonprofit organization which led to the Alternative House.

Judith Dittman, the Executive Director of Alternative House, said, "Kids aren’t running away to find themselves anymore, most of the young people that we see at the shelter have run away from home situations that have become unbearable for them. Sometimes they are actually homeless, we have had an increasing number of young people that have become homeless with a single parent."

THE ALTERNATIVE HOUSE offers help to teenagers that no longer have a place to call home as well as teens whose parents no longer have custody over them or have passed. The normal length of stay is three weeks or sometimes less, but they never release a child unless it’s in a safe and stable situation. There are so many teens in this situation that the Alternative House is almost always at full capacity.

Dittman says, "We always try to reunite them with family members; if that’s not possible we try to find a safe alternative living arrangement."

The Alternative House works closely with the Fairfax county public schools, which is how they started their newest program, the Homeless Youth Initiative. Schools were noticing an increasing number of teenagers that were still in high school but were homeless and lacked any support from a parent or guardian.

Dittman says, "We had one girl that was living with an aunt, the day the girl turned 18 her aunt brought all her stuff down to school and left it with the school counselor saying that the girl was no longer welcome in her home. The girl came to our emergency shelter for a few nights and we were able to help with a rent subsidy and that girl went on to graduate high school and now attends a four year college."

The Alternative House tends to help 60 to 65 teenagers a year in that similar situation. They help in a variety of ways; they can put four young women in a house in Vienna, they have rental subsidies throughout Fairfax County, and post homes where people agree to have the teenagers stay with them.

Dittman said, "We help them with making a budget, time management, help with schoolwork and finding a job or making resumes. We help with all the things that they may need to be successful and independent. They are allowed to stay in the program until they graduate, we have seven graduating this year and all planning on going on to higher education."

This program is breaking the cycle of teenagers on the track of becoming homeless. In mostly a year’s time, the Alternative House is setting them up to achieve higher education and find fulltime jobs.

For the past ten years the Alternative House has been succeeding in another program, Assisting Young Mothers. AYM is a long-term program that provides training and counseling to pregnant or teenage mothers that are homeless.

The AYM helps the teenage mothers to free themselves from the chaos and domestic violence to a more structured environment. They must attend class every evening and meetings with staff every week to check on their progress. One of the main things is they must save half of their income to put towards a future home or to pay off their debts.

After being in AYM for 18 months, the young women can go in to AYM 2 which is a similar program that helps them pay for rent and get their feet solidly on the ground.

THE FINAL PROGRAM that the Alternative House offers is their Community-Based Youth Services, which operate predominantly in Culmore and Annandale. It offers teenagers as well as younger children from 4th-6th grade a safe place to go after school with friends as well as help with homework.

Dittman said, "Areas in which these programs are located have some of the highest crime rates in Fairfax, we are trying to prevent kids from getting recruited into neighborhood gangs. We also are trying to prevent them from becoming sexually active too young and becoming a pregnant teenager going into our Assisting Young Mothers program."

The Alternative House also has helped over 30,000 children with their Street Outreach program simply by providing food, clothing, and counseling to children in need.

Dittman has been with Alternative House for 17 years and the executive director for 15. She describes her job as an opportunity to make a difference in individuals’ lives as well as a community as a whole.

For more information on the Alternative House go to http://www.thealternativehouse.org/index.htm or call their hotline 1-800-SAYTEEN which is open 24/7 and will be answered by a counselor or trained volunteer.