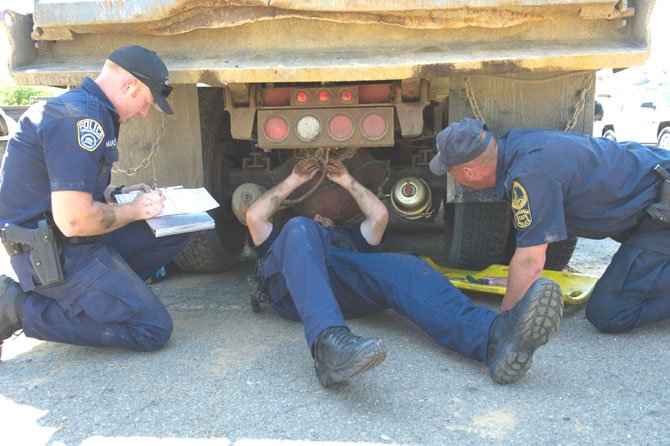 At first glance, it looked like a big-rig parade, with large commercial trucks lined up one behind the other in a parking lot off Route 28 in Chantilly. But they were there for safety inspections.

For four hours last Thursday, May 31, from 7 a.m.-1 p.m., Motor Carrier Safety (MCS) Officers from jurisdictions across Northern Virginia joined Fairfax County’s MCS officers to inspect potentially unsafe vehicles. And if a violation was serious enough, that truck was taken off the road until it was repaired.

“We’re checking the brakes and weight,” said Lt. Justin Palenscar, who supervises Fairfax County’s MCS unit. “For example, we put a trash truck out of service because it was overweight on one of its axles. We also make sure drivers have the proper license to transport certain things like nitrogen or propane. And if explosives come through Fairfax County, they need to notify the fire department ahead of time.”

“One driver today had alcohol on his breath,” added police spokeswoman Lucy Caldwell. “And that’s not allowed with any commercial vehicle.” 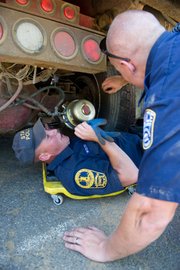 Besides Fairfax County, participating in the mass inspection were officers from the Virginia State Police, City of Fairfax, Arlington, Prince William and Loudoun counties, the Town of Herndon, Fort Belvoir, and the Department of Motor Vehicles. They pulled over trucks traveling mainly on Routes 28 and 50 and had them divert to E.C. Lawrence Park so they could be examined.

Last year, officers removed from the road one-third of the trucks they inspected in a similar safety check. They inspected 61 trucks and placed 22 out of service for serious violations involving brakes, licensing, lighting, steering components and other infractions.

This time, by 10:45 a.m., they’d inspected 60 trucks and taken 19 of them out of service. By noon, those numbers had jumped to 80 trucks inspected and 27 removed from the road. And when they’d finished, they’d checked 110 trucks and found 288 infractions —107 qualifying as out-of-service violations. As a result, they placed 40 trucks out of service.

“I took a 40,000-pound dump truck out of service because the driver didn’t even have a commercial driver’s license,” said Fairfax County MPO Michael Gibbons. “If he’s out there driving, untrained, it’s kind of scary.”

Palenscar said the inspection was “also a way of telling people we’re concerned about safety. And then maybe drivers will not get behind the wheel of a truck that shouldn’t be operated, hasn’t been maintained or isn’t in working order.”

Also on the scene were members of the Fairfax County Fire Marshal’s Office doing hazmat checks. “If we got trucks carrying oxygen cylinders, gasoline or home heating oil, we’d still check for faulty brakes and broken springs on the frame,” said Lt. Jevon Wilson, assistant fire marshal. “But we’d also check for the proper paperwork, making sure they’re certified to transport it, that it’s properly secured and that it’s what the paperwork says it is.”

PFC D.L. Pierce, with Fairfax County’s Motor Squad, was inspecting a seven-axle dump truck carrying 50,000 pounds of stone. “It’s not overweight, but we found one tire below pressure,” he said. “If it’s below 50 percent of its pressure rating, it’s taken out of service. This one was at 40 PSI [pounds per square inch] and should be at 120 PSI. That’s only a third below, so the driver’s filling it up with air to see if it holds or if he has a leak.”

Earlier that day, Pierce had taken a truck hauling a heavy wood-chipper off the road. “The chipper wasn’t properly connected to the truck,” he said. “So if it had become detached, it would have run off the road and killed people — literally.”

PFC David Pierce, an officer with the Fairfax County Police Motor Carrier Safety Unit squats in front of a truck with a flat tire.

As the day progressed and word of the inspection spread from one trucker to another, some drivers traveling along I-66 pulled over to the shoulder and stopped, rather than risk a surprise inspection their vehicles might not pass. Others, though, were happy to cooperate and saw the value in the undertaking.

Driving the dump truck with the low tire pressure was Luis Lopez, who worked for his father’s company, Lopez S. Trucking Inc. of Sterling. He was hauling gravel from Lopez Stone on Route 29 in Fairfax to the Dulles Toll Road for the road construction there.

He said he didn’t mind waiting while his vehicle was inspected. “It’s good that they do it because they keep the trucks in good condition,” said Lopez. “It’s so we won’t have an accident.”

Driver Ben Ortega of the Manassas-based Brothers Paving Co. also saw the need for the inspection. He was driving a roll-off truck carrying a bobcat from Chantilly to a construction site in Manassas when the officers flagged him down.

“They looked at the brakes, steering wheel and all the lights — turn, brake and tail lights,” said Ortega. “The brakes need to be adjusted, but they’re not bad enough to have the truck taken out of service. I’ll have to have them adjusted, though. They didn’t give me a ticket, just a warning.”

He was glad to have the vehicle inspected because “many times you don’t know what’s happened underneath the truck with the brakes. And if it wasn’t checked, something could happen on the road and it could be dangerous.”

Fairfax County Police Motor Carrier Unit Officer Sean Regan, a certified motor carrier inspector, consults with a reference book to determine whether a crack he found in the sidewall of a truck tire is grounds for putting the truck out of service.

Deputy Craig Foster with the Loudoun County Sheriff’s Office said the truck inspections save lives. “We recently had a trailer that got away from a truck, crossed over the Route 50 median in Chantilly/South Riding and hit a car head-on. A lady was driving and, the last I heard, she had brain damage.”

“The driver’s break-away protection had failed,” continued Foster. “The coupling wasn’t hooked up correctly, and I ask myself what would have happened if we’d been able to get to that truck before then and inspect it so he could have fixed it.”

Det. C.C. Snyder with Fairfax County’s Crash Reconstruction Unit said her department works hand-in-hand with MCS. “With serious crashes, we rely on these guys,” she said. “So what they’re doing today will make it safer. With all the road construction in the area, there are so many trucks on the road here; and chances are, if they’re involved in a crash, it’ll be really serious.”

Snyder said the Crash Reconstruction Unit is called out on the fatal and major-injury crashes. “Hopefully, these inspections will prevent these trucks from being in the wrecks we’ll have to come out and investigate,” she said. “They’re saving lives today, I’m convinced.”