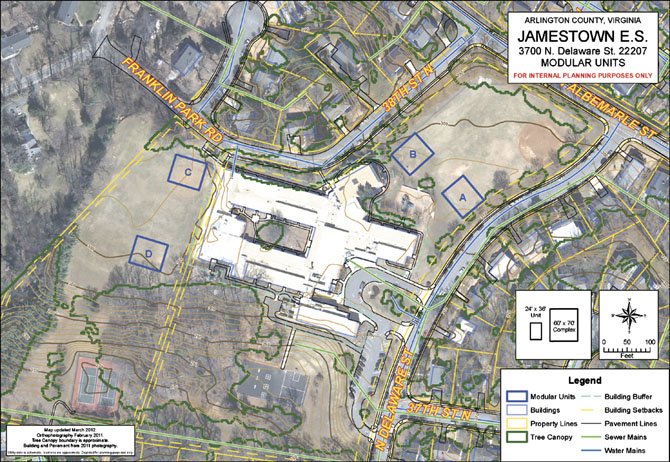 This map shows the locations Arlington County Public Schools suggested for trailer placement at Jamestown Elementary School. Community members noted the actual position of option A is closer to the school than what is displayed. Image Contributed

A public discussion on the placement of the trailers at Jamestown Elementary School was held June 4 to address community concerns with the initial placement.

Arlington Public Schools presented four options for trailer placement along with a table that outlined the pros and cons of each location.

Two additional placement options were suggested by the community, including swapping the current location of the trailer with the playground, and placing the placing the trailers in the parking lot.

There were two votes on which option the community preferred. The first vote weighed all the options against one another, and B and C were the top choices, with 29 and 26 votes, respectively. When weighed against each other, B received 36 votes and C 34.

The current location of the trailers, option A, received no votes.

“The default position should be what is in the best interest of the children,” said April Lehman, a community member who attended the meeting, “and that has not been the case during this entire process.”

Several members of the community cited that one of their biggest concerns with the current placement of trailers between the playground and the baseball field is that it would be difficult for staff to keep an eye on children playing at both locations.

Parents were also concerned about the space lost to the trailers. Lehman said that the Jamestown community uses the playground as its “bigger backyard,” and that the trailers reduced the available space by one-third.

Another concern with location A was that its distance from the school would make it difficult to quickly gather students into the building in case of emergency and that the ramps that are required by the Americans with Disabilities Act to lead from the trailers to the school would further reduce space.

Parents were also concerned that the lost space could be a potential hazard for children who might collide with the trailers while chasing after a homerun ball, or that children might poke sticks beneath the trailers or climb onto the roofs. Assistant Superintendent of Facilities and Operations Clarence Stukes said that skirting would be installed around the trailers to address the latter two concerns.

One mother said that her concern with option A was that her fifth grader who would be taking class in the trailers would be unable to focus with children from other grades playing all around the classroom. Jamestown principal Kenwyn Schaffner said that grades 1-5 have their recess and lunch at from 12:15 to 1:15, while only the kindergartners play earlier. Schaffner also said that P.E. is usually conducted inside the gym or on the side of the school with options C and D.

The trailers were installed to deal with capacity issues. Jamestown’s enrollment is 636 students. Without the trailers, the school’s capacity is 597 students. According to Arlington Public Schools Public Relations Specialist Frank Bellavia, the five units that are to be installed add four classrooms with an extra 24 seats each, for an additional total of 96 seats, making the school’s capacity 693 students.

Bellavia said the trailers cost between $250,000 and $300,000, with $190,000 going toward the five units and $60-$100,000 going toward installation and infrastructure. The current location of the trailers is optimal for utilities, so costs would increase in making the necessary changes at other locations. Options C and D both are also on public property, so placing the trailers there would require 4-6 additional weeks to get permission for installation.

Stukes said that the school hopes to have the installation completed before the teachers return in mid-August and that a decision on trailer relocation could be reached by the time the Jamestown school year ends.