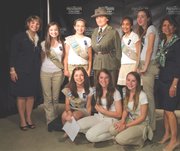 On May 9, Great Falls’ Cadette Girl Scout Troop 1111 was honored to join the president and the CEO of the Girl Scout Council of the Nation’s Capital (GSCNC) to unveil a lifelike wax figure of the pioneering woman who founded the Girl Scouts 100 years ago, Juliette "Daisy" Gordon Low.

Madame Tussauds launched the figure as a kick-off to a series of initiatives celebrating the Girl Scouts’ anniversary, which culminated in a huge "Girl Scouts Rock the Mall" event, taking place in Washington, D.C. on June 9. Led by Suzanne McGrath, the girls in Cadette Troop 1111, many of whom have been together as a troop since kindergarten, recently earned their bronze star award and are currently working toward their silver star award.