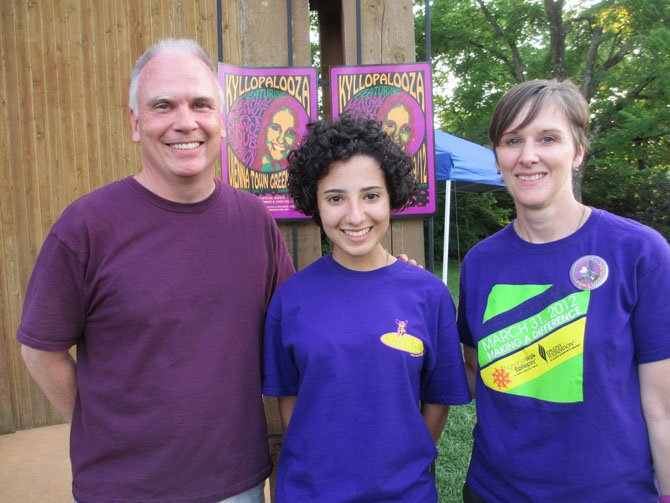 For two weather-perfect weekend evenings, the Vienna Town Green thundered in music, from soloists to bands, pop to folk, all in the memory of Vienna student Khristin Kyllo.

The Vienna Idol "finals" kicked off the musical extravaganza on Friday, June 8. The Green was a blanket of humanity, with families, teens, seniors and newborns wedging themselves in. Mayor M. Jane Seeman, on the panel of judges, looked out over the enormous crowd and commented, "this is what we had in-mind when we thought of the Town Green."

Vienna Idol, patterned after the television program American Idol, was founded by Caffe Amouri owner Michael Amouri to benefit the Khristin Kyllo Memorial Fund. Khristin Kyllo died on the last day of her first semester finals at Princeton University in December 2010. She was a James Madison High School graduate who Amouri coached in basketball there.

Seven finalists, accompanied by guitar or keyboard, vied for dollar votes. Jars were set up with either competitor’s name and dollar tickets represented votes. The three who generated the most votes won the first round and remained in the competition.

THE WINNER of the debut Vienna Idol, 14-year-old Ethan Schaefer, not only had his own fan club cheering him on, but attracted swooning young women, as well. Some held signs, pledging their devotion, from "Ethan, I love you" to "Ethan, will you marry me?"

Schaefer, a singer, guitarist and songwriter, is a rising sophomore at George C. Marshall High School.

An unofficial tally by Amouri puts the amount the spring-long fundraiser raised at $5,000, enough to fund a Khristin Kyllo "Dream Big" scholarship. The lawn votes alone raised $3,200. Along with the jug in Caffe Amouri and personal and corporate contributions, the sum rose to $5,000. Net proceeds benefit the Khristin Kyllo Memorial Fund, its scholarships and donations to Sudden Unexpected Death in Epilepsy [SUDEP].

"I’m so pleased to see so many young people participating," said Frances Brown, a Vienna resident since 1966, who comes to all the Town Green concerts. "It takes a lot of courage to get up there onstage in front of so many people."

Purple Kyllopalooza tee shirts swept over the lawn on Saturday night when Kyllopalooza took over the Town Green. Kyllopalooza is the primary fundraising vehicle for the Khristin Kyllo Memorial Fund. Net proceeds fund the Kyllo’s "Dream Big" scholarship, awarded to a James Madison High School senior in-need who has overcome challenges and setbacks in her life. Khristin’s parents, Tom and Julie Kyllo, founders of the fund, are donating 10 percent of the net to SUDEP awareness.

Vienna Idol supporters bought and designated one dollar tickets to register a "vote" for the finalist of their choice.

LOCAL BANDS donated their time and talent. Kyllopalooza raises money from the sale of tee shirts and accepts contributions.

Jim Baker, whose wife Elaine Chon-Baker was manning a ticket-vote jar, said the couple likes supporting good causes. "After seeing and hearing the talent at Vienna Idol, we wanted to see the full line-up," said Baker.

The 2012 "Dream Big" recipient, Kathy Longmire, plans on attending the College of Charleston this fall. She is also Vienna’s first recipient of the Bill and Melinda Gates Millenium Foundation’s scholarship program.

"It [fundraiser] will continue as long as people support it," said Tom Kyllo. "It’s a labor of love. "Kyllopalooza is an event where people can come and go, sit back, have fun. It’s about community."