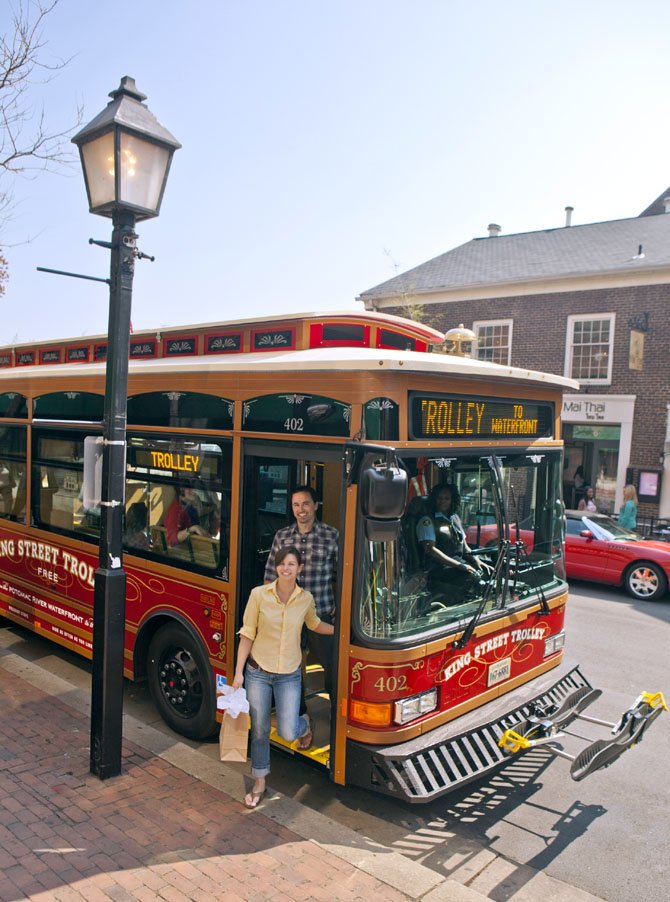 How It Will Work

Del Ray is sometimes called the “little neighborhood that could,” a reference to its history as a home for railroad workers at Potomac Yard. Since the yard closed, Del Ray has become one of the hottest neighborhoods in the Washington metropolitan region, building a reputation as a funky younger sister to Old Town. Now the two neighborhoods will share something else — trolley service. City officials are about to launch a new “Del Ray/Arlandria Trolley.”

“We are targeting visitors,” said urban planner Pierre Holloman. “But we know some residents will use the service in much the same way they use the King Street Trolley.”

According to a recent survey of the King Street Trolley, which was launched in 2008, 71 percent of users are visitors and 29 percent are residents. City officials expect that percentage to hold true for the Mount Vernon Avenue trolley, although some are questioning the route.

“I think this is a terrible waste of money,” said Genette Hill, who lives on West Street. “If the idea is to help businesses, then businesses should pay for it.”

THE COST IS PROJECTED to be $640,000 for the remainder of this year, an annual cost of $850,000, taken from the city’s transportation improvement program. City leaders say the cost is justified because of the success of the King Street Trolley, which has transported an estimated 2.1 million passengers in the last four years. An average of 13,000 passengers have boarded each week during the spring 2012. That’s a concern for the Parker Gray neighborhood, where many people say they would prefer the service to be based at the Braddock Road Metro Station instead of disrupting their neighborhood.

“It’s not clear to me that this is anything more than a political toy,” said Leslie Zupan, president of the West Old Town Civic Association. “Are we gutting the DASH bus service to provide this service?”

City officials say they considered using the Braddock Road Metro station as a base for the service instead of the King Street station, but decided against that idea. Many tourists use the King Street Metro Station, and city officials see the station as the best way to attract tourists into Del Ray and Arlandria. Furthermore, the station will soon be renamed King Street/Old Town, which is designed to attract even more tourists. So having the service terminate at the Braddock Road Metro, which is mainly used by residents, wouldn’t fit into their model.

“One of the reasons we wanted to use the King Street station is that we wanted the service to connect to the King Street Trolley,” said Avi Lerner, deputy director of the Alexandria Department of Transportation and Environmental Services. “So that makes it a much more appealing option.”

EXPANDING THE EXISTING trolley service was designated as a priority by the City Council after members approved the city’s transportation improvement plan in May 2011. Last year, city officials evaluated several areas for a potential expansion, including Carlyle, Eisenhower Valley and the West End. They examined business conditions, planned development, visitor attractions and potential ridership.

“Del Ray and Arlandria were selected as the destinations for expanded trolley service due to their critical mass of shops and restaurants,” wrote City Manager Rashad Young in a memorandum outlining the new service.

Young said the Mount Vernon Avenue route maximizes the potential for allowing riders to visit Del Ray and Arlandria, serving two Metro stations, 600 hotel rooms and five hotels. Although city officials originally planned to call the service “Mount Vernon Avenue Trolley,” 42 percent of respondents in a recent survey said they wanted to call it the “Del Ray Trolley” to help market the brand of the neighborhood. In the end, city officials compromised by putting both neighborhoods in the name.

“The vehicles will be staffed by trained drivers who will be trained and become familiar with Alexandria’s history and cultural resources, offering visitors additional information about the city and potential destinations as appropriate,” said Young.

A contractor will acquire, operate and maintain the trolley vehicles similar to the launch of the King Street Trolley, which is now operated with DASH vehicles. The new service is expected to attract between 110,000 and 160,000 riders annually.