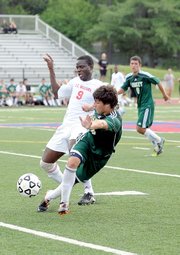 Alex Mansaray, left, and the T.C. Williams boys’ soccer team ended their season with a loss to Langley in the region quarterfinals.

Alexandria — The T.C. Williams boys’ soccer team opened the 2012 season with four losses in its first five games. The Titans ended the year as district champions who arguably outplayed one of the most skilled teams in the region, only to fall short.

T.C. Williams lost to Langley, 1-0, in the region quarterfinals on May 24 at Parker-Gray Stadium. Facing a team with size, skill and a 2011 state tournament appearance on its resume, the Titans put themselves in a position to win but couldn’t capitalize. Langley’s 6-foot-3 striker Justin Galiani headed in the game’s lone goal in the 61st minute, advancing the Saxons to the semifinals while ending the Titans’ season.

"I’m proud of the season and the job we did, the work we did," senior Manuel Benites said. "It hurts at the same time to lose after all the hard work, but I’m proud of my team. I’m looking forward to coming back and watching them next year."

After a 0-4-1 start, TC went 11-2-2 over the final two months of the season. The Titans defeated Lake Braddock, 2-1, in the Patriot District tournament final on May 18, capturing the program’s first district title since 2008. TC followed the championship victory with a dramatic penalty-kick shootout win against Stuart in the first round of regionals on May 22. Goalkeeper Nick Braun made a pair of clutch saves to help the Titans pull out a 1-1 (4-2) victory.

"I’m proud of the season and the job we did, the work we did. It hurts at the same time to lose after all the hard work, but I’m proud of my team. I’m looking forward to coming back and watching them next year."

"It’s been amazing," Benites said. "You don’t know how proud you are of your team until times like that. Times like when our goalie, Nick Braun stepped up. He looked like an all-star. You could put him against anybody; he would have [stopped] them that day. He was in the zone."

The loss against Langley left TC players and fans frustrated. Senior co-captain Kelvin Marin-Solis said the Saxons were allowed to get away with too much on the field.

"I feel like the refs lost control of the game and lost us the game," Marin-Solis said. "All the jersey pulling, elbows throwing, the late hits. … I guess the [referee] just wanted to let us play, but there’s a point where you have to stop that and he didn’t. We don’t play dirty. We’re not a dirty team. We play soccer. We don’t hit. We play soccer, we play the game."

Despite the disappointing loss, Marin-Solis said he will remember the team’s improvement in 2012.

"Going from 0-4-1 to being Patriot District champs again, to going to the quarterfinals of regionals," Marin-Solis said, "it’s a great turnaround."

TC head coach Martin Nickley said the Titans can be proud of what they accomplished.