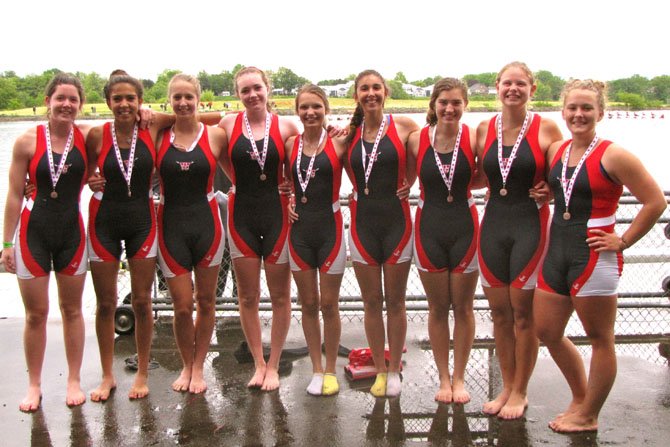 Racing on choppy waters and under stormy skies, the T.C. Williams girls’ varsity 8 stormed past the competition to capture the bronze medal at the 67th Canadian Secondary Schools Rowing Association Regatta.

The contest was held this past weekend on the Royal Canadian Henley Regatta Course on Martindale Pond in St. Catharines, Ontario. Featuring nearly 140 schools from Canada and the United States, the race is the Canadian national championship for high school rowers. Against this elite field, the T.C. Williams girls’ varsity 8 proved their mettle.

On Saturday — racing in windy conditions that made usually-placid Martindale Pond look like the Potomac River in March — the Titan rowers won their semifinal heat by nearly six seconds to advance to the finals on Sunday afternoon. Sunday’s weather was less windy but no less stormy.

After a delay brought on by a torrential downpour that was marked by thunder, lightning and hail, the T.C. girls’ varsity 8 stormed down the Royal Henley race course to capture the bronze medal with a time of 7:16.90, behind winner Saratoga Springs and runner-up Governor Simcoe Secondary School.

Members of the girls’ varsity 8 include coxswain Rosa Procaccino and rowers Kate Banchoff, Jackie Tilley, Gabriella Salcedo, Caroline Olsson, Katie Pickup, Alexandra Lemke, Nadia Magallon, and Kate Arnold, who was rowing in place of injured Alysson Emblom. The girls’ varsity 8 was guided by T.C. Williams girls’ head coach Mercedes Kiss, who could not travel to Canada with the boat due to a significant family obligation. Two assistant coaches who worked with the girls’ and boys’ novices this season, Maureen Tuchowski and Katie Bond, were able to help oversee the crew while Coach Kiss was away.

The girls’ varsity 8 was not the only Titan boat to make it to the finals on Sunday. The T.C. boys’ lightweight 8, who won the Virginia state championship less than a month ago, and the boys’ lightweight 4, who were racing together for the first time this season, also made it to the elite finals. The lightweight 8 earned their trip by winning their semifinal heat on Saturday, while the lightweight 4 earned the right to compete in the final by finishing 3rd in their heat. Other solid performances by Titan rowers at the Canadian Nationals included the T.C. Williams boys’ varsity four, who made it out of the qualifying heat to advance to the semifinals, and the girls’ freshman 8, who also advanced to the semifinals

and narrowly missed a trip to the finals even though they were racing as a junior boat against more experienced competition.

The Canadian National Regatta was the last race of the year for the T.C. Williams crew team and brings to an end a very successful rowing season.

In total, the Titans brought home four medals this spring. In addition to the bronze medal won by the girls’ varsity 8 in Canada this past weekend and the gold medal won by the boys’ lightweight 8 at the Virginia Rowing Championship last month, the girls’ freshman 8 also won two medals, capturing the silver medal as the second-fastest freshman boat in Virginia and winning the bronze medal at the U.S. Rowing National Championship last week.

The spring 2012 rowing season will officially conclude this Saturday, June 9, with the annual T.C. crew awards ceremony. Events will begin at 4 p.m. at the Dee Campbell Boathouse in Old Town.

For more information on T.C. Crew, visit www.tcwcrew.org or