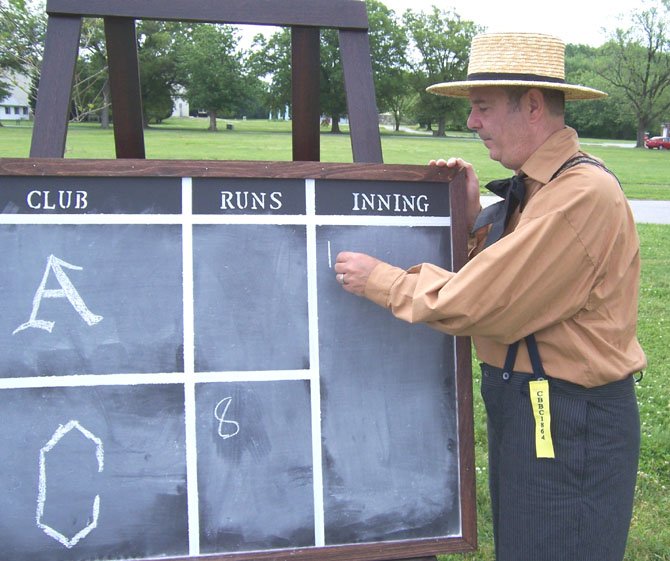 This is how they keep score in a "vintage" baseball game. Photo by Richard "Pastime" D'Ambrisi

Saturday, June 23; games at Caffi Field, behind Community Center. Exposition/demonstrations set up at 11 a.m. Opening ceremony noon. Round-robin 1864-rules games played at noon, 2 p.m. and 4 p.m. Skills classes for children aged 6 to 12 are at 1:30 p.m. and 3:30 p.m. The Magnetic Telegraph Company, in period dress, gives homecrafts and communications demonstrations throughout the day. No charge.

Baseball, as played 150 years ago – except for beaning the runner – comes to Vienna on Saturday, June 23, as three 1864-rules teams play a series of exhibition games for the community.

"If you love baseball or history, this is the place to be," said project initiator Sarah Jane Brady. "The [CW] games weren’t really competitive. They encouraged camaraderie. It’s fellowship."

Brady, a Town of Vienna Sesquicentennial committee member, came up with the idea for the vintage baseball game at a committee meeting last December. As someone who loves both baseball and history, Brady conceived the project as a community event incorporating fun and learning. With the backing of the Town of Vienna and Historic Vienna, Inc. [HVI], Brady and her husband Dave Lanphear created the day’s activities and recruited the participants.

"We’re showing another side of the Civil War," said Lanphear. "Reenactments usually focus on battle preparation. This is one of the ways troops took a break."

The Elkton Eclipse, Potomac Nine and the Old Dominons of Northern Virginia will play a series of round-robin games at noon, 2 p.m. and 4 p.m. At 1:30 p.m. and 3:30 p.m., children are invited to participate in skills classes instructed by players. The Magnetic Telegraph Company sets up its field tents at 11 a.m., and Historic Vienna, Inc. is selling sodas, water, peanuts and small toys, as well as distributing information, from 12 to 5. Costumed participants will stroll around the community center grounds throughout the day. There is no charge for admission to the Civil War Living History Exhibition.

ADDING TO THE FESTIVE ATMOSPHERE is that modern games will be played at Waters Field, adjacent to Caffi Field. People will have the opportunity to witness the evolution of the sport.

"This is a family event," said Lanphear. "Something you share with the whole family. Kids get to participate in hands-on activities. You’re not just an observer.

Civil War troops had no Skype to connect with home, no movies in the compound or Bob Hope tours. For recreation, they played instruments, gambled, drank, and did things that re-enactors are unlikely to do. They also made baseball America’s pastime.

"Big city" boys brought balls with them to their camps and fashioned bats to hit the balls. The match – as the baseball game was called – was played on an open field. Pitchers threw underhand to the strikers, eventually known as batters.

Until 1864, baseball was a rough game. The base-runner was fair game. You could hit him with the ball if that stopped his advancement. In 1864, new rules were adopted that prohibited intentionally hitting a runner. The game was played bare-handed, no gloves, and the bats were big and heavy. Today’s Civil War vintage baseball teams play by 1864 rules.

After the war ended, soldiers brought baseball back to their hometowns. Leagues formed all over the country and, by 1890, the first Negro League had formed.

Like the sport itself, the terminology used in baseball has changed, too. What was a "match" in 1864 is now a game. Aces/tallys are runs, huzzah is hurrah, "leg it" now means to run to base. A striker is a batter and striker to the line is batter up. Now you know.

The Vienna vintage baseball game and living history experience were designed with families, baseball fans and history aficionados in mind. There’s something for pretty-much anyone. The Civil War Living History Exhibition is presented by the Vienna Sesquicentennial Committee, the Town of Vienna and Historic Vienna, Inc.

A PROJECT of the town’s Civil War sesquicentennial commemoration, the June 23 exposition includes the baseball games, 1864 skills classes for children aged 6 to 12, demonstrations of period crafts and telegraphing, and re-enactors in 1860s dress. Re-enactors will show how soap, quilts and bonnets were made and a Civil War spy presents his side of the story.

The Living History exhibits open at 11 a.m. and the first game starts at noon. Parking can be found near the Community Center or at the Vienna Elementary School at 128 Center Street, S., or at the Vienna Medical Center at 115 Park Street, SE. There is also parking on Locust Street (follow parking sign restrictions and on Glyndon Street, SE.

"The reason this caught the attention of the committee and the Town is that Vienna is a baseball town," said HVI president Anne Stuntz. "This is a way to bring Civil War history to a new or different audience than most of our activities do."