Centreville — When Juan Castro came to the U.S. from El Salvador, six years ago, he only spoke a few words of English and was a stranger in a strange place. But he adapted well, learned quickly and worked hard at school and in his community.

It all paid off. Last Thursday, June 7, the Westfield High senior received the 2012 Character Award from the Fairfax County School Board. He was honored for demonstrating “high moral values, strong integrity and good character” and for being a role model for his peers.

“He’s one of the most dynamic, nicest kids ever,” said Dan Harris, Castro’s counselor at Westfield. “Juan’s the kind of kid you hope your son grows up like. He’s mature, humble, intelligent, honest and charismatic, and he has a great future in front of him.”

Harris nominated Castro, 20, as Westfield’s candidate for this award. And ESOL teachers Merrily Friedlander and Patty Skiffington wrote letters about him to the School Board when it was weighing him against the contenders from all the other FCPS high schools. 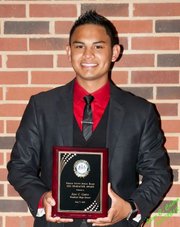 Juan Castro with his 2012 Character Award.

Because he had to take so many ESOL classes, this is Castro’s fifth year at Westfield. But this year, he only needed to take English 11 and 12, plus government. He’s also aided other ESOL students there.

“Juan’s helpful with them when they come here with no English,” said Harris. “He interprets for them, shows them around the school and helps them with their English in their [beginning] ESOL classes.”

To compete for the character award, Castro had to write about five activities he does daily that mean the most to him. He wrote about church, clubs, school, family and community.

His church is Asambleas de Dios Vida in Manassas. He started attending there five years ago and works with the youth group and plays drums with the band during Saturday and Sunday services. He also goes to Tuesday Bible study.

At school, Castro works with the Edge Club, a Christian club that meets Mondays after school. The 20-25 student members sing, play games and have Bible study and guest speakers. “I founded it two years ago so students could develop a connection with Jesus,” he said. “They go to their own churches and, if they have problems, we all talk about them and give them help and support.”

And when Principal Tim Thomas implemented a program whereby Hispanic seniors helped underachieving Hispanic freshmen, Castro was a mentor. “I told them I also struggled, my freshman year, but now I’m doing well,” he said. “It made me feel good to be able to help them, and now they’re doing better and want to be mentors, too.” He also mentored ESOL students in Friedlander’s class in his free time.

“When I first came from El Salvador to California, where my father lives, someone helped me, so I wanted to help others,” said Castro. “I tell them not to give up because, even if you fail, at least you’ve tried. It makes you stronger and, next time, you might succeed.” When learning English, he said, “The best thing for me was practicing and asking my English-speaking friends how to say things correctly.”

Castro also tries to be a role model for his younger siblings. For example, he said, “I don’t just tell them — I show them, ‘Don’t smoke or skip classes.’” He lives with his mother, stepfather, three brothers and one sister in Centreville’s London Towne community. He’s the oldest, and his brothers are 19, 14 and 11; his sister is 16.

“My two youngest brothers just came here two months ago from El Salvador,” said Castro. “They were living with my grandmother for 10 years; and before they came, my mom was saving money to bring them here.”

So to help her out, Castro sold his iPad and gave her the proceeds. “She was surprised and really happy and emotional; she started crying,” he said. “Then my oldest brother did the same thing, and that helped, too.”

He’s a good neighbor, too. Every Thursday afternoon, he helps his 80-year-old neighbor carry in her groceries and do various chores. This year, he also revamped her garden; he cleaned it, mulched, planted flowers, grass and bushes and transformed it from overgrown to attractive.

As if all that weren’t enough, Castro’s a student at two schools. Besides attending classes at Westfield, he’s taking Auto Tech I and is in his third year of carpentry at The Chantilly Academy. He’s also learning electrical work and plumbing and would like to someday be a carpenter and own his own company.

“Juan’s the kind of kid you hope your son grows up like.”

School Board Chairman Janie Strauss called him personally to tell him he’d won the character award. “I was so happy and surprised,” he said. “I’m thankful, but I believe God has control of everything. I have a close relationship with God and I believe I won because He’s in my life.”

Castro said there were many gangs in El Salvador when he lived there and he figured he’d join one. “My best friend did, and someone from another gang killed him,” he said. “I was 13 then; my parents were in the U.S. and I was living with my grandmother. I went to school in the afternoon and worked in a supermarket in the morning.”

One day, the gang members called his house, demanding $7,000. Since his parents were in America, explained Castro, they thought he could get the money from them. Instead, his parents brought him, his sister and oldest brother to the U.S. to remove them from the danger.

“Once I started going to church, I could see there’s a plan and a purpose to everything,” he said. “That’s because, if I’d stayed in El Salvador, I could be dead. And once I accepted Jesus in my heart, I began changing and good things started happening. I saw things differently, and now I can help other students.”