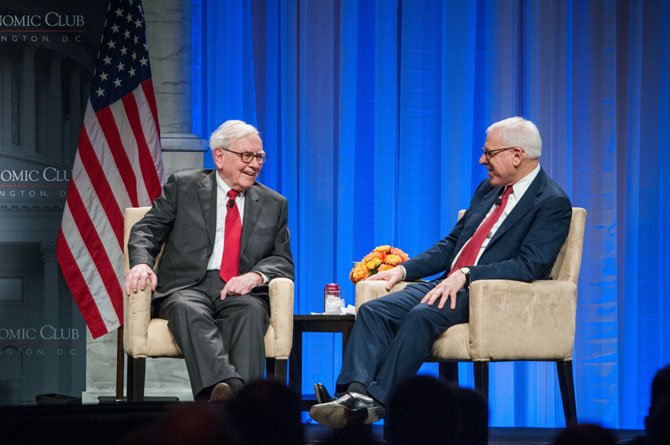 Warren Buffet and David Rubenstein during a conversation onstage at the 25th anniversary dinner of The Economic Club of Washington, DC. Photo by Sam Kittner

Alexandria — With financial and philanthropic superstar Warren Buffet in attendance, the Alexandria Seaport Foundation was awarded a $50,000 grant from the Economic Club of Washington D.C. at its 25th anniversary celebration June 5 at the Marriott Wardman Park.

"We are thrilled to have been selected by the Economic Club of Washington as one of 10 area nonprofits to receive this generous award,” said ASF Executive Director Kent Barnekov. “The Economic Club's recognition of the importance of programs serving this population is extremely gratifying.”

Barnekov was joined on stage by ASF apprentice Dearndrey Mobley, an Alexandria native whose brother graduated from the program years ago and now serves in the Coast Guard in Alaska. Also in attendance was ASF instructor Esteban “Steve” Hernandez, an apprentice graduate who went on to serve in the Marine Corps and is currently enrolled in college.

The Alexandria Seaport Foundation offers disadvantaged youth and young adults ages 18-22 a paid, work-based apprentice program in boat building that prepares participants for careers in the building trades. Additionally, ASF provides apprentices the opportunity to earn a GED if needed.

"At a time when state and local funding for GED programs is at risk, this grant from The Economic Club will help ASF continue to include in its Apprentice Program this crucial ingredient for success in the workplace," Barnekov added.

Economic Club member Andrew Blair, president and CEO of Colonial Parking, nominated ASF for the grant, which sought to recognize organizations that prepare underserved youth in the D.C. area for success in school, the workplace and life.

The highlight of the evening was the dialogue between Economic Club President David Rubenstein and Buffett, who discussed the economy and Buffett's rise to billionaire status as well as his philanthropic efforts. “My surplus wealth has no utility to me,” Buffett said.

For more information on the Alexandria Seaport Foundation or to volunteer, visit www.alexandriaseaport.org.