Lyceum reveals life in Alexandria during the Civil War. 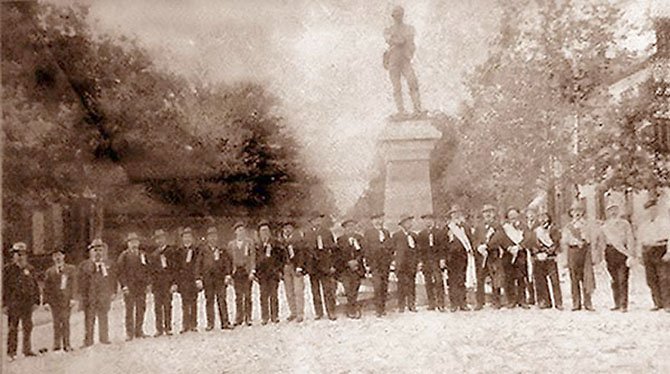 The dedication of "Appomattox," a statue dedicated to fallen Confederate soldiers from Alexandria, in May 24, 1889. Photo Courtesy of the Library of Congress 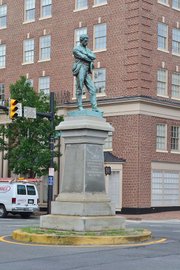 A statue erected in the memory of the Confederate soldiers from Alexandria who died during the Civil War. The statue faces south to show its defiance of the North.

Alexandria — Throughout the Civil War, Alexandria was an occupied city under the control of the federal government. An exhibit at the Lyceum, Alexandria's history museum, displays what life in the city was like during the that time, as well as, before and after the war.

In the years before the Civil War, Alexandria was a thriving commercial center. "There were a lot of new industries, factories, and different things starting in Alexandria during the 1850s," said Jim Mackay, director of the Lyceum.

The city was also an important seaport. Alexandria Canal, which was built in the 1830s, helped provide passageway through the Potomac River, and it helped connect the port with the Chesapeake & Ohio Canal, which stretched from Washington, D.C. to Cumberland, Md. However, according to Mackay, the completion of the Baltimore and Ohio Railroad made the Alexandria Canal irrelevant and much of the trade was being "siphoned off to Baltimore." The construction of the Alexandria, Loudoun & Hampshire Railroad was a way for the city to catch up. The railroad helped to bring grains and other raw materials from the Piedmont and Valley regions of Virginia.

For much of the mid-19th century, Alexandria, like the country as a whole, was divided by the issue of slavery. A pre-war incident in the city highlighted the national tensions that the country was facing. The Rev. Alfred Griffith, the minister at Trinity United Methodist Church in Alexandria, went to a Methodist convention in the 1840s and become involved in a debate about slavery, which he spoke out against.

After Griffith returned to Alexandria, many of the members in his congregation disliked what he had said about slavery. The members who supported slavery left to form the Washington Street United Methodist across the street.

It's "an interesting pre-war incident because it indicates how strong the feelings [over slavery] were before the war," said Mackay. 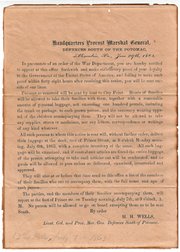 Photo Courtesy of the Lyceum

In July 1863, this deportation notice was sent to Alexandria residents suspected of aiding the Confederacy. As families waited on the docks with their baggage, the order was revoked at the last minute.

SOUTH CAROLINA'S SECESSION from the Union and the attack on the Fort Sumter, which was controlled by the federal government, both in 1861, had led to the start of the Civil War. More southern states decided to secede as well, including Virginia. However, during the debate of whether or not to secede, many Alexandrians weren't sure of what to do.

"There was so much pride in this community in the history that had happened here, the links to George Washington, [and the] fierce, strong sense of patriotism" made many in Alexandria hesitant to want to leave the Union, said Mackay.

As time went on, however, people in Alexandria became more and more secessionist. Finally, on April 17, 1861, Virginia voted to secede from the Union. Due to Alexandria's proximity to Washington, D.C., Union troops were sent in to occupy the city, and would do so for the remainder of the war.

Life was difficult for people living in Alexandria living under occupation.

"I think for a lot of people it would have been a strange experience because of marshal law being in effect. You couldn't come and go into town the way that you had before the war. You needed a pass for everything. You needed the federal government's permission to do so many things that would have just been a part of daily life before."

Mackay said, for instance, that if somebody living in neighboring Fairfax County wanted to go into Alexandria to do some shopping, that person would need some kind of permit to enter the city. The same went for people who wanted to leave the city. He said that there's a quote in the exhibit from an Alexandria resident during the war stating that saying how there's "a line outside the provost marshal's office every Monday," which was where the travel passes were issued.

This created much animosity among many Alexandria residents towards the Union troops due to the restrictions on placed their lives, and there were incidents of violence between the residents and the troops.