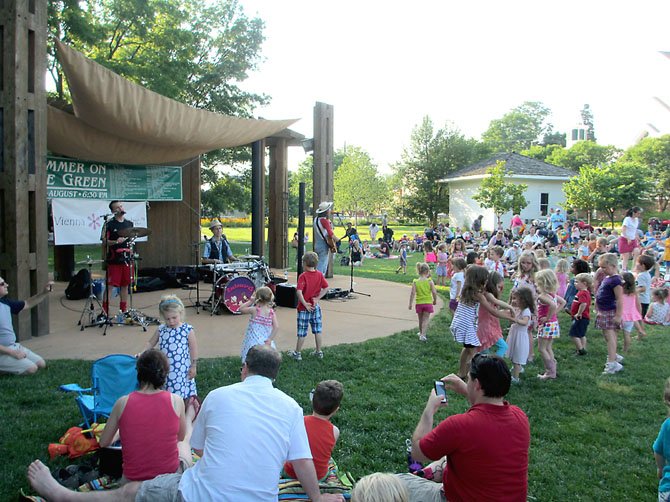 Coach Cotton, Willie Bob and Boogie-woogie Benny – no kidding – are Rocknoceros. And the children just love them, as evidenced by the last weekend concert on Vienna’s Town Green. Photo by Donna Manz.

On June 20, local kiddie-rock stars Rocknoceros kicked off the children’s concert series on the Town Green. One could hardly find grass among the ground cover of blankets and lawn chairs and humans of all ages and heights, from newborns in carriers to grandparents.

Rocknoceros, whose CDs are well-known to preschoolers, performed their classics, such as "Brush Your Teeth," to their new hit, "Pink." The United States song and "Virginia" even had parents swaying.

While adults are encouraged to dance like nobody is watching, the kids danced on the Town Green as if everyone was watching … and everyone was. The kids jumped, twirled and clapped while their parents snapped photos and videos. It was a very-Vienna kind of event.

"We’re big Rocknoceros fans," said Kate Vincent, who organized the concert on behalf of Vienna Moms, Inc. Vincent, with her husband Paul and their two children Maya and Avery, was delighted with the turnout but not at all surprised by the breadth of popularity. "They’re super-popular with all the preschoolers." Vienna Moms, Inc. sponsored Rocknoceros in 2011 – the inaugural children’s concert series - as well.

Cory Dunn, with Andrew, 3, and Matthew, 1, said that Rocknoceros plays music that appeals to both kids and adults. And meeting up with friends is fun for moms and their children, Dunn said.

"We love it, it’s so much fun," said Liz Lucca, with Logan, 4, and Jacob, almost 2. "We’ve run into so many of our friends from playgroup and school."

The Rocknoceros concert was sponsored jointly by Vienna Moms, Inc. and Whole Foods of Vienna, who brought, and gave away for free, pounds and pounds of organic cherries and bottled water to treat the crowd. Across the street in the Whole Foods parking lot, store staff were grilling hamburgers for sale. 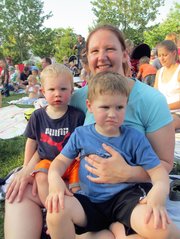 Cory Dunn, with sons Matthew and Andrew, said that Rocknoceros plays music that appeals to both kids and adults. It’s also fun to meet up with friends.

"It’s nice that Whole Foods is not only sponsoring this but providing free water and cherries," said Lucca.

"We’re all about community and this is a big family-oriented community event.

"It’s so hot, we decided to just give the water away to help people stay cool."

And staying cool was the order of the day as the thermometer peaked at 100 degrees. It was going to take more than heat and humidity to keep away Rocknoceros fans.

"It’s a good day to be out in the evening and we love Rocknoceros," Vienna mom Liza Lara said, keeping an eye on her dancing little man, Leo.