Centreville — At a recent meeting of the Centreville Immigration Forum (CIF), state Sen. Dave Marsden (D-37) listened to a progress report on the Centreville Labor Resource Center (CLRC) and was pleased by what he heard. 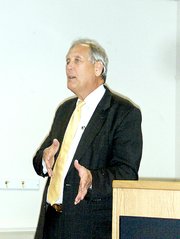 “This is such a great idea,” he said. “In Herndon, the day laborers are back on the streets again. When you have a choice between order, chaos and estrangement vs. community, it’s easy to make it.”

Marsden told the CIF members, workers and CLRC staff that Centreville’s labor center is successful because of all their efforts. “What’s being created here will make Centreville a better community, bring people together and provide something positive,” he said.

“People need an example of how they can take care of each other, and I’m proud of how well this center is operating,” he continued. Noting that Supervisor Michael R. Frey (R-Sully) supported and championed the CLRC, Marsden said, “The success here will change people’s views of what can happen.”

“We’re all humans, whether we’ve lived here 15 years or 15 minutes,” said Marsden. “It’s a bumpy road through life and it goes much smoother when people support each other.”

Referring to the immigration issue on a state and national level, as well, he spoke about Gov. Bob McDonnell’s signing of a law requiring Virginians to show ID before they can vote. “I think this will intimidate people so they won’t come back to the polls with it and won’t vote,” said Marsden. “My view of immigration is that we need to let the federal government do its job as it sees fit. And here in our community, we need to look after each other and help each other.”

“I think what you’ve done here is an example of that,” he added. “When you take care of people, problems tend to go away. When you build walls and point fingers of blame, you make things worse and don’t solve anything. People in Richmond think that, because we have a large number of immigrants here, we must have a lot of crime. But Fairfax County is the safest county in the commonwealth.”

Basically, said Marsden, “Simple solutions to complex problems just don’t work. In Alabama, crops are rotting in the fields; and Prince William County scared off so many people, it hurt their housing market.” As a result, he said, “Many people are returning to their home countries as their economies are improving.”

He acknowledged that he “took a lot of grief” because he voted to allow immigrants in Virginia to have in-state tuition. But, he said, America needs to educate the young immigrants who are here and “give them hope.” And locally, said Marsden, “I’m glad this county looks for solutions, instead of trying to put wedges and walls between people.”