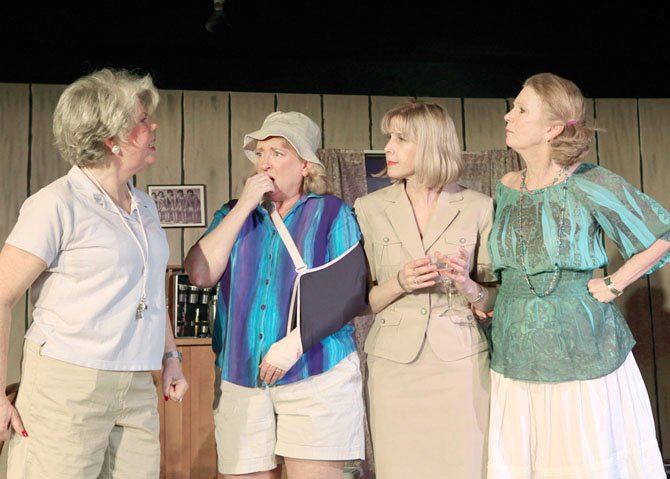 They met long before the phrase “BFF” was part of the American lexicon, but for five college teammates, the comfort and frustrations of “best friends forever” are rays of sunshine in the Port City Playhouse production of “The Dixie Swim Club,” now playing at Alexandria's Lab Studio Theatre at Convergence.

Written by Jessie Jones, Nicholas Hope and Jamie Wooten, "The Dixie Swim Club" is a glimpse into the lives of the swim team friends as they meet annually at a beach house in the Outer Banks of North Carolina. Over the course of 33 years, babies are born and divorces happen as life's twists and turns are served up with a heavy dose of Southern hospitality and humor.

“This was a lot of fun to do,” said director Eddie Page following the Feb. 24 opening night performance. “The playwrights are so talented and the writing so good, although when we first began rehearsals, I did stop and ask myself 'what have I gotten into with all these women?'”

The colorful cast of characters begins with Sheree (Tina Anderson), the perpetually organized team captain; Lexie (Barbara Hayes), the femme fatale who has been divorced more times than the others have had their nails done; Dinah (Kacie Greenwood), a caustic overachiever who never met a martini she didn't like; Vernadette (Gayle Nichols-Grimes), the embodiment of every woeful country song ever written; and the perennially sweet and innocent Jeri Neal (Laura Champe Mitchell).

Jones, Hope and Wooten are three of the most widely-produced playwrights in the country and have shaped the script so well its lines would work for radio. Jones co-authored the Southern-fried funeral comedy “Dearly Departed” while Wooten was a writer and producer on the “Golden Girls” TV series.

But what makes this production shine is its talented cast of actors. As Sheree, Anderson is the glue that holds the group together, while Hayes is spot on in her mannerisms and narcissism of the oft-married Lexie.

As Dinah, Greenwood is acerbic with an understated sense of humor and Mitchell is Southern sweetness as eager-to-please Jeri Neal, a nun whose life takes the most surprising turns of the group.

Nichols-Grimes, as the self-deprecating Vernadette, is a riot with her deadpan delivery of some of the best lines in the show.

“Vernadette is really a lovely character,” said Nichols-Grimes, a WATCH Award-winner most recently seen in the Little Theatre of Alexandria's production of “Noises Off.” “It's not often you find a script that makes you laugh out loud and cry at the same time so when Eddie sent this to me, I just knew I had to do it. It was too good to pass up.”

Page, who does double duty as set designer, is assisted by producer Robert Kraus and costume designer Susan Boyd in mounting a funny and poignant production that makes the audience want to dive right in during each of the team's annual group swims.

With a powerhouse of talent on stage, “The Dixie Swim Club” is a can't-miss hilarious and touching comedy about BFF friendships that truly last forever.

The Port City Playhouse production of “The Dixie Swim Club” is playing now through March 10 at the Lab Studio Theatre at Convergence, 1819 N. Quaker Lane, Alexandria. For tickets or more information visit www.portcityplayhouse.com.