A comedic look at putting on a show. 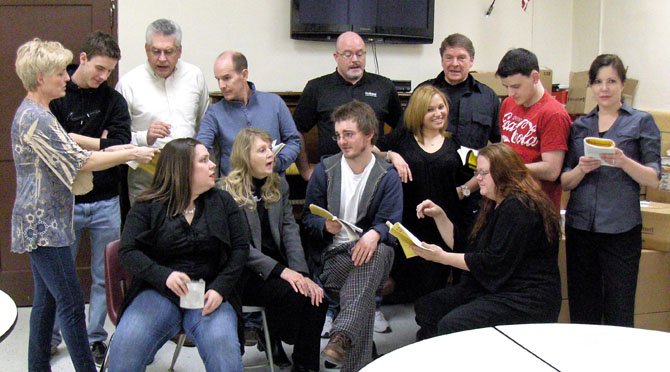 Members of The Alliance Theatre portray the cast of a summer-repertory company rehearsing for a show.

Centreville — Everything that can go wrong does go wrong in The Alliance Theatre’s production of “Laughing Stock.” But that’s the way it’s supposed to be as the local thespians portray members of a theater company putting on three different plays during their summer season.

It’s an affectionate glimpse at what it takes to put on a show. And when scenes and characters from “Dracula,” “Hamlet” and “Charley’s Aunt” accidentally get jumbled together, laugh-out-loud comedy is the result.

“It gives the audience a look into a part of theater they don’t get to see,” said Director Zina Bleck. “The script is extremely well-written, with wonderful comedy that’s absolutely hilarious. The audience will have as much fun as the actors are having on stage.”

The cast and crew of nearly 30 have been rehearsing since January, and Bleck says things are going well. “They’re a tight-knit team and have gotten to know each other, both on and off stage, and that brings them closer as performers,” she said. “They trust each other enough to take chances on stage, which makes the show more real and interesting for the audience.”

And just as art often imitates life, Producer Maggie Swan says the play’s about “how the community-theater group you’re working with becomes your family. It has all the different personality types — and we can relate to people in our own theater group in this show.”

Calling it both funny and witty, Swan said, “When I read this play, I just loved it.” Because the theater troupe is trying to perform three plays at once, she said, “Lines and scenes get mixed up. For example, as Dracula prepares to bite someone’s neck, someone from ‘Charley’s Aunt’ comes in and offers him tea.”

Annie Ermlick portrays Sarah, the troupe’s stage manager. “She’s excellent at her job and sarcastic with an edge, but it’s to cover up how she really feels,” said Ermlick. “She and the artistic director, Gordon, used to be married and she still loves him. But whenever they’re alone together and have a vulnerable moment, one of them puts up their guard.”

Ermlick likes her character’s substance — “Sarah has a lot of layers and not everything meets the eye,” she said. “I also like her sarcastic delivery. Farce is my favorite thing to do, but she’s not the typical farcical character, so she’s interesting to me. I’m having fun analyzing what she does; she’s cocky to mask her vulnerability.”

She said the play’s well-written and the characters are “dreadfully inept” actors, so “the audience has to be able to relate to them as ‘real people.’ There’s lots of room for drawing them out and feeling out how they should be as individuals. And Zina’s comedic timing is perfect.”

Playing Gordon is Matt Jordan. “He’s been the theater company’s artistic director for 12 years, and he’s not sure if they’ll be able to continue,” said Jordan. “The money’s not coming in, so this play could make or break them. Gordon’s feeling stifled because he can’t do the shows he wants to do; he has to do the shows the donors want him to do. He’s passionate about the theater and really loves it.”

Jordan wanted this role because he and his character have a shared passion for the theater. “All of us actors have worked with these types of characters before, and the audience should recognize them, too, and the situations they go through. They’ll like to see the disasters that occur and how it all comes together so the theater company is able to put on a wonderful show and end its season on a high note.”

Michelle Ballard plays Kate Conlan, the managing director of The Playhouse in New England, where the summer-repertory shows are being staged. “She’s a bit of a theater geek and a numbers cruncher,” said Ballard. “She cares less about the personalities that tread the boards than about how well the machinery of the theater troupe functions.”

“She makes sure there are enough pencils, the Coke machines are filled, etc.,” said Ballard. “But all these logistics become the bane of her existence, and she doesn’t miss an opportunity to tell the others how important the minutiae are. I love it; I’m a veteran musicals actor, and this is my first straight role. It’s different from anything I’ve played before. Kate provides comedic relief in the play because she’s so detail-focused and takes it a bit too far, so she’s a laughable character.”

Ballard said the show has “great zingers and one-liners” and will be fun for the audience to watch. “They’ll enjoy the debacle of the wannabe actors falling all over themselves,” she said. “They’ll also like getting a peek behind the scenes at repertory actors — and the comedy that ensues when things go wrong.”