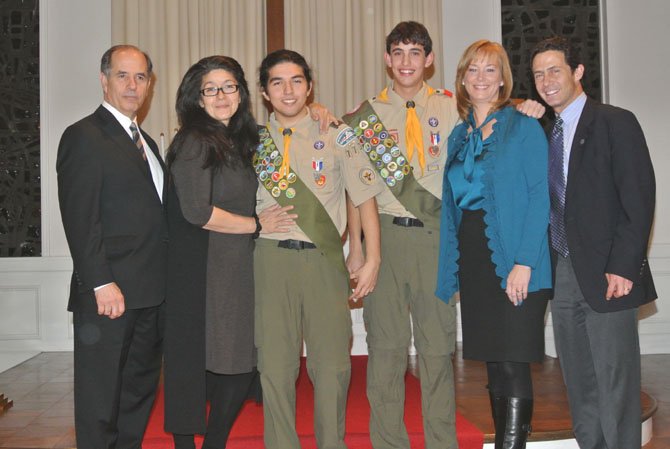 Jeff Bass and Michael Fusco of Potomac received their Eagle Scout awards at a ceremony on Feb. 28. They are both members of Troop 773, which meets at the Potomac United Methodist Church.

Jeff Bass is a senior at Bullis High School, has been active in Scouting since the second grade, progressing through Cub Scouts and Boy Scouts. He has participated in Double H High Adventure base as well as camping at Goshen Scout Reservation and participating in many Scout outings. For his Eagle project, Jeff produced and directed a musical revue of Broadway show tunes for the residents of Landow House and Ring House, Rockville. Jeff was the captain of the Bullis Cross Country Team and an accomplished thespian, recently starring in “Les Mis.”

Michael Fusco is a senior at Winston Churchill High School, Potomac, and has been active in Scouting for 12 years. For his Eagle project, Michael organized several initiatives to benefit the community Council for the Homeless at Friendship Place, Washington, D.C. He led a group of volunteers who painted the office, cleaned and painted the outdoor porch, cleaned the kitchen, restocked the pantry and provided food for a community meeting. Michael is a founding member of the Churchill Crew Team.