Langley Gears Up For Case Day 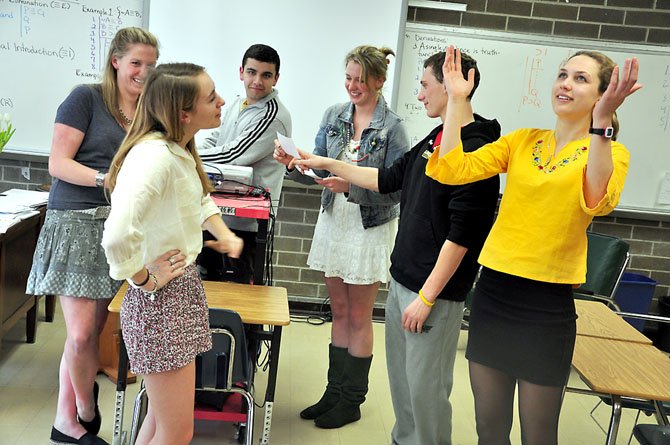 The cases deal with a fourteen-year-old who committed capital murder, and whether or not it is considered cruel and unusual to sentence him to life in prison. They will be heard March 20, by the Supreme Court, and several Langley students will attend.

"We wanted to get a lot of people involved in this process, especially since it’s so relevant to us, which is rare in a Supreme Court case," said Alicia Underhill, one of the event's chairs.

Shams Haidari is part of the counsel, and she said it was difficult to separate from such a gruesome crime.

"The first thing I had to do was reconcile my emotional reaction with what the law says, and every time you take a look at the case, more questions and layers come out," she said. "But it’s been a lot of fun to prepare with my fellow counsel, and even ones on the other side. While we know one of us will win and one will lose, we’re all just hoping that each other can present the best case possible, it’s not too competitive."

"We want to examine the developmental, the social aspects of things like family life and peer influence on young people," said Nick Rifken, chair of the co-curricular committee and president of the Psychology Club. "We took the position that young people shouldn’t be given life in prison, because so much about their life, like their family, they didn’t have a choice in."

Other groups who have submitted amicus briefs for the case will send representatives to Case Day to give their thoughts on the cases.

"We invited all the groups who submitted briefs, groups like Amnesty International and the NAACP Legal Defense and Education Fund to come present to us," said Kimiya Haghighi.

"They’ll give a panel discussion about what is in their briefs, and they’ll try to influence the justices here, just like in the real trial."

"We just planned a short lesson about the three branches of government, but the students were so interested, and kept asking such engaged questions, that we ended up talking for most of our hour there," she said. "They were asking about the judicial system, commenting on things they thought were fair or unfair and some even had questions about things like the Miranda rights process. Their questions got hard, but it was really nice to see that interest."

THE EVENT CHAIRS Chaffee Duckers, Sun Park and Underhill have been hard at work on Case Day since December. Since that time, they’ve had to plan out almost every minute of the day, decided who to include and exclude, as well as coordinate with all the committees.

"What makes this so different is that it’s almost entirely student run," Park said. "You get so used to having a checklist of steps, but this is really this big nebulous task involving hundreds of people, so it really takes some time to figure out."

Duckers said it was less stressful than anticipated, thanks in large part to the efforts of the teachers who volunteered to assist them.

"No matter what, teachers have been there to help, and they really helped a lot, they’re just the best," she said. "At first we were worried about having enough to fill the day, but soon it became clear we had to start trimming and cutting."