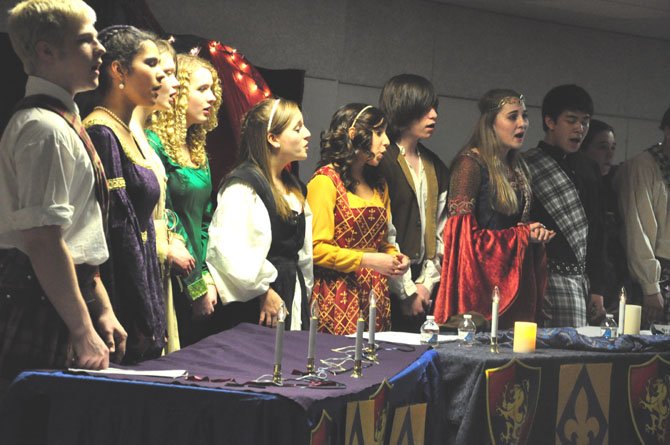 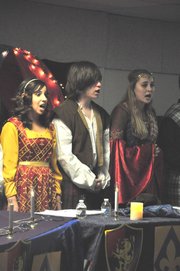 The Madrigals spent the evening at center stage, with their 16 members donning Renaissance garb and weaving songs from different centuries into a lively program, all told in rhyming verse.

Along with the Men’s and Women’s Choir, the Madrigals performed carols from Finland and Spain, songs in Latin and Celtic, along with popular tunes from artists such as Queen, Billy Joel and Solomon Linda.

"Performing ‘Bohemian Rhapsody,’ in all its parts and harmonies, was one of the toughest songs, but the most rewarding," said senior Chris Chen, who played the king. "But it came out well, and that was the product of a lot of hard work."

Junior Wolfe Glick agreed, saying "it was fun to work it out and get comfortable singing it together."

Between songs, the Madrigals told a story of a royal meal cursed by a witch, which causes the king, his queen, their son and his wife to argue with a visiting duchess and her family, as well as the witch and her family.

The event, which raises funds for the choral department’s annual scholarships, almost never came to be. Originally scheduled for Jan. 21, the event was postponed when inclement weather closed schools and cancelled activities for the day.

"Up until a month after the original date, we weren’t sure that it would even be rescheduled," said senior Nick Stone. "But we’re glad we could put the show on, it’s a cool tradition."

This was the 59th annual edition of the Boar’s Head Feast, which is one of the McLean Choral Department’s signature events. The chorus is ranked ninth nationally.