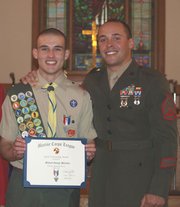 Michael Melendez (on the left) with his brother, Staff Sgt. Justin Smallwood.

Boy Scout Troop 673, a charter organization of the Great Falls United Methodist Men, has been developing exemplary young men for sixty years. Michael George Melendez, son of George and Theresa Melendez of Great Falls, is known within the scouting community simply as "Fuz." A senior in Langley High School, Fuz has been active in scouts since joining as a Tiger Cub in first grade. He crossed over to Troop 673 in 2005, after earning his Arrow of Light. Since joining the troop, Fuz has served in numerous leadership positions as Chaplain Aide, Patrol Leader, Assistant Patrol Senior Leader, and Senior Patrol Leader. Fuz has attended eight summer scout camps and the Northern Tier High Adventure. He was elected to the Order of the Arrow ("Scouting's National Honor Society") in 2008. He also earned the Junior Shooting Team award.

For his Eagle Project, Fuz was responsible for installing the foundation of the Japanese Friendship Garden at Great Falls Elementary School. The initial planning of the garden began in 2006 after he returned from Japan with his Japanese Immersion classmates. Fuz and his Japanese teacher, Sahara Sensei, met with Ernie Leighty, principal of Great Falls Elementary, in 2007 and requested that a Japanese garden be included on the master plan for the renovation of the school. Coordinating with multiple specialists and school officials, and with help of over sixty volunteers, Fuz completed his Eagle Project the summer of 2010.

Fuz was honored to receive his Eagle Scout medal from his brother, Staff Sergeant Justin Smallwood. Smallwood, a 2003 graduate of Langley High School, has served his nation proudly during three tours of duty in Iraq and Afghanistan. Smallwood has been an inspiration for his brother, earning numerous medals and commendations during his service, including a Purple Heart.

Fuz has earned Scholar Athlete Awards while playing football, wrestling, and lacrosse. He has lettered in wrestling and lacrosse. Fuz volunteers at St. Catherine of Siena Church as a lector, altar server, and helps with various church needs. Beyond high school, Fuz will attend college and pursue studies to prepare him for a career in federal law enforcement. Upon receiving his degree, he hopes to commission and serve in the armed forces.