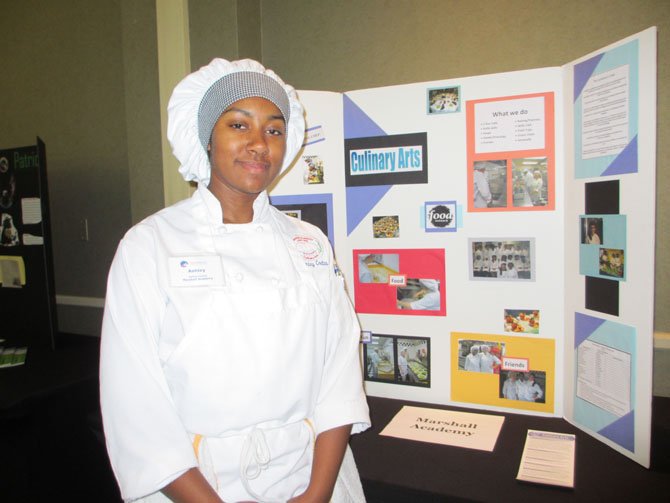 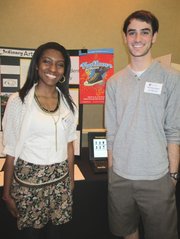 Ashleigh Wilson and Nicholas Aidan Smith, Oakton High School, talk about art history and its relationship to humankind. Smith performed a song-and-dance routine from the school’s production of "Footloose."

The ViennaTysons Regional Chamber of Commerce [VTRCC] honored Vienna-area schools at its annual Youth and Education Luncheon on March 15 at the Westin Tysons Corner. Twenty two of twenty three local schools accepted the invitation to participate with exhibitions of their strong points, from the Marshall Academy’s culinary arts program to the music and dance performances of Kilmer Middle School, Oakton High School, Green Hedges School and Wolftrap Elementary. The Vienna Elementary School "Jammers" performed as opening act for the program.

"What I learned today," said VTRCC president Lisa Huffman to a round of laughter, "is that when I was in school, I had no talent."

Approximately 190 Vienna-area students attended the luncheon and talked about their schools’ displays.

The Warbot of James Madison High School, manned by some of the robot’s creators, strutted its athletic ability. 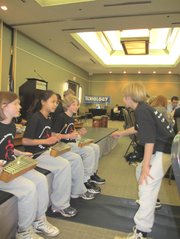 The Vienna Elementary School Jammers conducted by a student musician.

"Art is the epitome of self-expression," said Oakton High School senior Nicholas Aiden Smith, who not only answered questions at his school’s art exhibit, but performed a musical number, as lead actor, from Oakton’s spring production of "Footloose." Smith is the president of the Thespian Honor Society at Oakton.

Smith’s classmate, Ashleigh Wilson, also a senior, talked about her passion for art and art history, saying that art reflects our own history. "We see what was important in that time."

NEW THIS YEAR was the participation of financial institutions that vied for "business" from the luncheon’s students. The youngsters visited each of the credit unions and banks set up at the hotel and then voted for the most favored with evaluation forms and with "funny money." Exhibitors included Apple Credit Union, BB&T Bank, M&T Bank, Navy Federal Credit Union, Northwest Federal Credit Union, United Bank and Virginia Commerce Bank.