Wernher von Braun —centennial of his birth is March 23 — came to rest locally. 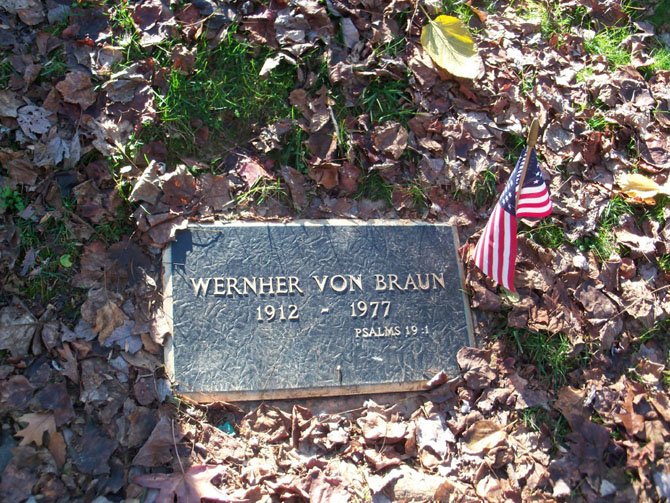 Where is von Braun's Telescope?

The parting gift of Wernher von Braun's staff on leaving Huntsville, Ala. in 1970 was an 8-inch Celestron telescope with camera attachment. Aerial photographs taken for the City of Alexandria in March 1973 show his observatory adjacent to the swimming pool behind the home at 816 Vicar Lane.

Von Braun's estate records are public in Alexandria's Circuit Court. An October 1978 inventory values the telescope and camera at $2,000 and the first accounting lists them as a specific bequest to wife Maria.

Neighborhood rumor has it that the observatory was given to popular singer-composer John Denver. Denver had a great personal interest in flying; in fact, he died piloting an experimental aircraft. When von Braun created the National Space Institute (now the National Space Society) to arouse public opinion in favor of space exploration, Denver became a member of the original Board of Governors. He attended meetings and performed at fundraisers. His well-publicized home in Colorado featured an observatory. These points have fueled the rumor that Denver wound up with von Braun's telescope. Unfortunately, the rumor is incorrect.

Alan Hale, then owner of Celestron, has ample reason to doubt that Denver obtained von Braun's telescope. "I knew John Denver as he visited with me at Celestron, and we had a few conversations on the phone about helping him to obtain the correct equipment for what he wanted to do. He was inspired by the heavens as it helped his creativity in writing songs. He bought [two models of telescope] which were kept at his home in Denver."

The last word on von Braun's telescope would be from his widow. She resides in Northern Virginia, not far from Vicar Lane, but has persisted in a life-long pursuit of personal privacy. Efforts to contact her failed.

For his entire life, Wernher von Braun looked up and wished to be one with the stars. In the end, he became one with the earth, and that earthly plot is in Alexandria.

This year marks the centennial of von Braun's birth (March 23, 1912), and the 35th anniversary of his death (June 16, 1977). As a member of the Third Reich's Nazi party with rank of major in the paramilitary SS, there is no mystery as to why he does not lie in Arlington National Cemetery. Questions could be posed as to why he is not buried in Wirsitz, Germany, his birthplace; or Huntsville, Ala., where his team of German engineers began the U.S. military rocket program after World War II; or Cape Kennedy, Fla., the premier launching site of his successes.

The simple answer is that von Braun lies at Section T, Plot 29, Site 5, Ivy Hill Cemetery, in King Street near Janney's Lane, because he was a resident of Alexandria when death found him in Alexandria Hospital.

Timothy B. Burk represents the most common type of visitor to the cemetery and gravesite: through an interest in rocketry and space flight as a youth. The interest continues into adulthood and includes collecting space memorabilia.

"In recent years I've read several of his biographies and, as an engineer, have studied his rocket [the Saturn V] at some level of detail," he said. Traveling from home in Pennsylvania to visit the Air and Space Museum, he continued, "I decided to see if I could find [von Braun's] grave. I did so, and decided to place the flowers there. I suppose just something I wanted to do at a personal level."

The final element of Burk's connection with von Braun may surprise some. "I also take my faith quite seriously, as did von Braun," he said. One reported example of that faith involves a 12-year old boy from Carefree, Ariz., dying of cancer. When an article mentioned the youngster's interest in space, von Braun was touched and led his staff in praying for the youth.

Charles Jennings' approach is more that of local history buff, not only in relation to Alexandria but also to Huntsville, Ala.

Retiring as a U. S. Naval officer, Jennings and his family decided to stay in the Washington area. Known to walk for exercise in the Rosemont neighborhood, a neighbor mentioned von Braun's grave. Jennings has passed it many times over the last seven years. "I've seen people leave Apollo patches, Saturn 5 rocket models, U. S. flags, and many times flowers," he said. "Occasionally, I see people looking for his grave, people who have come long distances to find it, one couple from Germany."

Born and raised in Huntsville during the heyday of the rocket program, Jennings grew up at the height of von Braun's celebrity. "I went to elementary, junior high, high school and college with children of the German scientists. My father worked for one at NASA and my high school drama teacher was a son of one of von Braun's V-2 colleagues," he said.

Von Braun left his position at the Marshall Space Flight Center in Alabama to become a senior executive at the National Aeronautics and Space Administration's Washington headquarters. Arriving in spring 1970, he and wife Maria reportedly looked at 50 properties before settling on a house in an Alexandria cul-de-sac. For the family, they added a swimming pool to exercise and a telescope observatory to enjoy the skies. Biographers hint that principal use of the pool was van Braun's daily lap swimming. City directories of the era list their residence as 816 Vicar Lane (off Quaker Lane across from Virginia Theological Seminary). Those directories also state that he is a "nuclear scientist" at NASA.

Although quite unusual for a family home to be titled only in the wife's name, that is the case with von Braun. The deed states that Maria owns the house as "her sole and separate equitable estate free from the control and marital rights of her present or any future husband." She sold it in 1979.

The house seen today differs in appearance from the 1970s. The first new owners added a room next to the garage and improved landscaping. The next and current owners since 2005, husband and wife David J. Arp and Laurie J. Clark, built the roof dormer and reconfigured the front porch. They decided to leave the telescope platform alone, at least for the moment, but are rebuilding the swimming pool.

Losing the fight with cancer, von Braun died at 3 o'clock of a Thursday morning. Private burial services were held the next day according to cemetery staff, before any announcement of his death. The Washington Post had no report on von Braun's death until the weekend. However, Alexandria's Gazette provided a front page report the day he was buried. Consistent with the family's wish for privacy, the article reports von Braun's attorney, Phillip Tierney, refused to say where the burial occurred and an Ivy Hill Cemetery employee avoided comment.

One week to the day of von Braun's death, friends and associates held a formal memorial service in Washington's National Cathedral but, according to The Washington Post, "members of Dr. von Braun's family did not attend." Services were conducted by Dean Francis B. Sayre, Jr. in sunlight through a stained glass window whose centerpiece is a small rock that astronauts brought from the surface of the moon.

Recent inquiry to the cemetery for details about von Braun's burial was turned aside "out of respect for the family's privacy." A staff member does confirm the grave location and remarks that inquiries and visitors arrive from time-to-time. Von Braun's attorney, now retired, did not respond to multiple messages.

Asked if any note would be taken of von Braun's centennial birth date this year, the German Embassy in Washington D.C.’s answered: "There is no event planned."

A visitor to the grave will find a plain, flush-to-ground marker:

The biblical passage is a von Braun favorite and reads:

“The heavens declare the glory of God; and

the firmament showeth His handiwork.”