Coach Brunt wants to see more confidence out of Patriots. 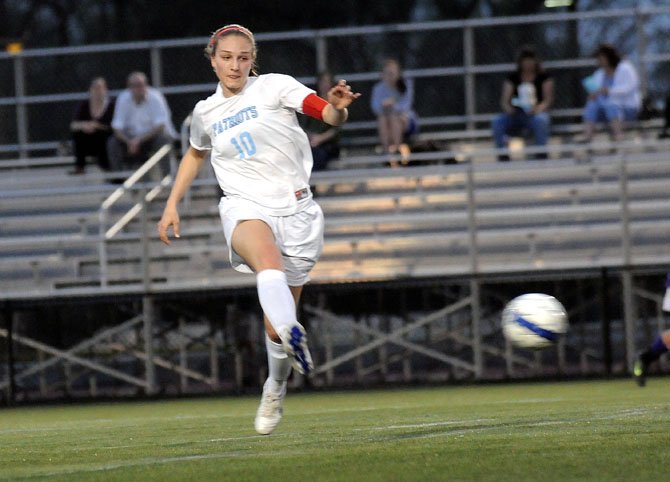 Arlington — The Yorktown girls’ soccer team failed to capitalize on several scoring chances early its March 23 match against Lake Braddock. Whether it was missing an open net or simply coming up empty with a decent look, the Patriots found themselves in a scoreless tie midway through the first half.

Head coach Vicky Brunt would later say the Patriots need to change their approach in the early stages of competition. On this night, however, sophomore Meghan Flynn made sure Yorktown’s miscues wouldn’t register in the loss column. 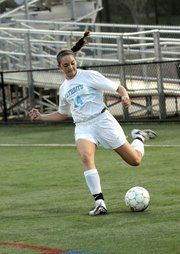 Flynn scored a pair of goals and sophomore Kendall Logan added one as Yorktown beat Lake Braddock 3-0 at Greenbrier Stadium. Flynn’s first goal came off a short corner in the 25th minute, when she received a pass from sophomore Alex Puletti and booted a shot from the right side of the field over the goalkeeper’s head.

"We take whichever way the defender doesn’t go and just go for the shot or the cross," Flynn said of the short corner. "I just thought the shot was on."

Logan gave Yorktown a 2-0 advantage with a goal less than six minutes into the second half. Flynn scored again with less than eight minutes remaining in the contest.

While the Patriots did enough to win, Brunt would like to see the team take advantage of its early opportunities.

"What we talked about tonight was playing with a little bit more confidence right from the beginning," Brunt said. "[There is a] difference between teams when you go out on the field commanding right form the beginning. We still go out there kind of thinking it’s going to be a game --- they’re going to do the best they can, and hope for the best, and that’s how we look in front of the goal. We don’t look like, ‘Yup, here’s the first one — bam. Here’s the second one — bam.’"

"We still go out there kind of thinking it’s going to be a game — they’re going to do the best they can, and hope for the best, and that’s how we look in front of the goal. We don’t look like, ‘Yup, here’s the first one — bam. Here’s the second one — bam.’"

While Brunt would like a more aggressive approach, Yorktown produced positive results early in the 2012 season. The Patriots started 2-0-1, opening the year with a 1-1 tie against Centreville and a 4-0 win against Annandale before defeating Lake Braddock.

Senior captain Isabel Arnold said while any victory is enjoyable, beating a team outside of the National District is a step toward earning respect in the Northern Region.

"That’s always the thing coming out of the National District, trying to represent for the whole district," Arnold said. "Lake Braddock’s … always one of those powerhouse schools, so, yeah, it’s a good win."

Arnold was first-team all-district forward last season, but injuries have forced Brunt at times to play Arnold toward the back. Brunt said she would like to get Arnold back into a goal-scoring position.

Logan, another offensive threat for Yorktown, saw limited playing time during her freshman season, due in part to commitments to her club team, but came on strong toward the end to help the Patriots capture the 2011 district title.

"I told her [last season], ‘We’re going to get you so that by the end of the season, you’re going to be a game-changer,’" Brunt said, "and she totally was, especially our district final. She’s got that break-away speed and she had a nice finish tonight."