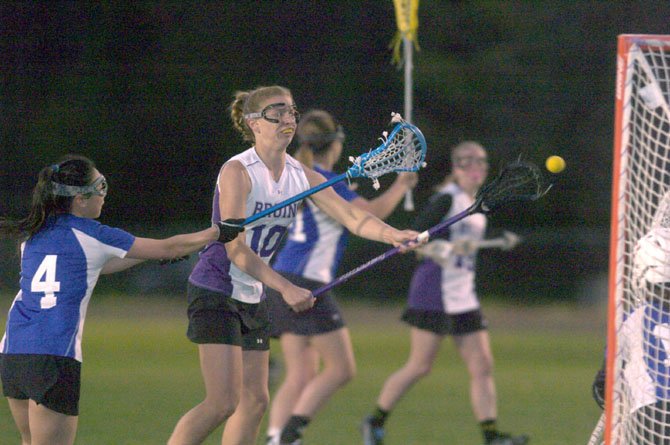 Burke — Lake Braddock sophomore midfielder Allie Snow scored less than 30 seconds into Tuesday’s girls’ lacrosse match-up against T.C. Williams. Moments later, Snow controlled the draw, scampered down the field and scored again. Fellow 10th-grade middie Kristen Gaudian then made it three goals in the opening minute and the Bruins were off to the races.

In less than 15 minutes, Lake Braddock built a 10-0 lead and cruised to a 15-6 victory on its home field during the Bruins’ Patriot District opener on March 26. Snow finished with a team-high four goals, all in the first half, while Lake Braddock built a 13-2 halftime advantage. The Bruins took their foot off the accelerator in the second half, opting to pass the ball around the perimeter.

"I think we’ve been working together well," Snow said, "and we’ve been able to win the draws."

Draw control helped get Lake Braddock on track as Snow’s effort lifted the Bruins to an early lead that was never challenged.

Snow’s third goal gave Lake Braddock a 5-0 lead and her final goal extended the margin to 9-0.

"She’s one of those players that are really talented," Lake Braddock head coach Victor Chen said. "I can’t say enough good things about her. The maturation phase in terms of being a lacrosse player has increased tenfold from last season. She’s one of those types of players, she’s an impact player. She’s a utility player for us; she knows that she can really dictate the tempo of a game and anything else for us. She’s an integral part of the offense and defense."

"She knows how to attack the goal and play close quarters to the goal, so that helps a lot," Chen said. "She has really good field sense and real good high lacrosse IQ."

Lake Braddock opened the season with a 20-8 loss to Oakton, last year’s state runner-up, on March 16. The Bruins responded with a 16-10 victory against rival Robinson on March 24 and Tuesday’s win against T.C. Williams. The victory against Robinson is believed to be the Bruins’ first in more than a decade.

"We learned a lot from playing Oakton first," Chen said. "We knew we had to limit our turnovers. That was our game plan all along. I knew if we limited our turnovers we would be able to pull it together. … We did that and we were able to excel and execute against Robinson, which was a great win for us. That was a telling game for this team."

"We learned a lot from playing Oakton first. We knew we had to limit our turnovers. That was our game plan all along. I knew if we limited our turnovers we would be able to pull it together."

"We worked the ball around a lot when we got down [on the offensive end]," Gaudian said, "and we did well on transitions."

The Bruins will compete in the Cape Henry Girls’ Lacrosse Spring Invitational on March 30-31. Lake Braddock will return to district action on April 11 at Annandale.