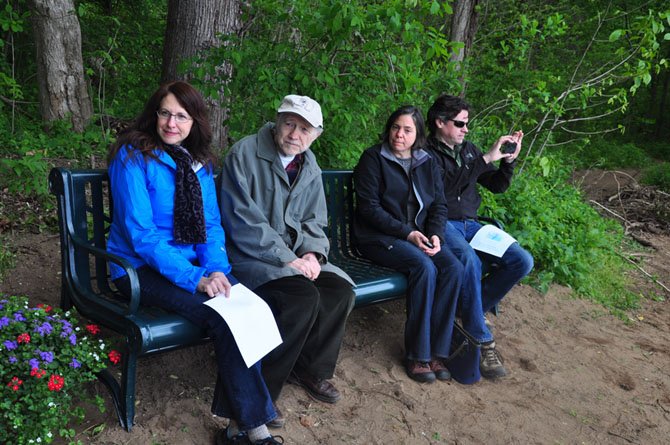 From left, Karen, Frederick, Jennifer and Christopher Weck sit on the bench at Riverbend Park dedicated to Eleanor Weck, founder of the Great Falls Trailblazers. Photo by Alex McVeigh.

Great Falls — Eleanor Weck, or Ele to her friends, spent more than four decades in Great Falls. As a tireless advocate for nature and trails, she spent much of her time in Riverbend Park. Weck passed away last May at the age of 72, and on Saturday, April 28, family and friends gathered to dedicate a permanent tribute in the park.

A few hundred yards from the visitor center, along the river, a memorial bench for Weck was installed, the inscription of which reads, "Walk gently on the Earth, Ele Weck 1939-2011."

Family and friends of Eleanor Weck, who passed away last year, gather at a bench dedicated to her honor in Riverbend Park Saturday, April 28.

"I was both incredibly impressed and quite a bit overwhelmed by her vast knowledge," she said. "I probably would have just walked away, but it was Eleanor that really motivated me to stay. She was so proactive, so positive about what could be done and how much impact we could make."

Anger said she was always impressed with the dedication and motives of Weck’s extensive work in the community.

"I learned very early on that here’s this woman who was doing basically a full time job with the amount of hours she would put in, but she wasn’t doing any of it for herself, but for her community," she said. "That selflessness was a part of her entire life."

Robin Rentsch, a friend of Weck’s and member of the Trailblazers, called her "a treasured friend whose loss cannot be measured."

Joan Barnes met Weck soon after moving to Great Falls, and found the two had much in common. 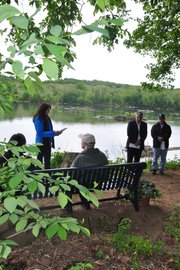 Karen Weck, daughter of Eleanor Weck, speaks to family and friends at the dedication of a bench April 28 in memory of her mother, who helped create trails throughout the Great Falls community.

"It was exciting to talk to another woman who was a physical scientist," she said. "One of the joys of being with her was not only the work we did on the trails, but because she was a great person to have a conversation with."

SINCE ITS FOUNDING, the Great Falls Trailblazers has grown to more than 750 members, and has obtained almost $2 million in grants for the construction of trails along Georgetown Pike and Walker Road.

Supervisor John Foust (D-Dranesville) worked with Weck on many local projects, and he also had many fond memories of Weck and her passion for trails.

"What made Ele so special was that she took the time and made the effort to learn about trails, the way they were planned and built, and then used that knowledge and passion to make good things happen," Foust said. "Sitting along this beautiful trail in a park Ele loved is the perfect way to remember her."

Marty Smith, manager of Riverbend Park, said the location for the bench was carefully chosen.

"Ele loved the bluebells," said Smith, referring to the spring flower that covers much of Riverbend Park every Spring. "So we chose a spot where people could sit along the river and look at the bluebells."

Weck’s husband and three children were the first to sit on the bench that bears her name, and Frederick Weck said he knew what her reaction would be.

"She would not have liked all the attention, but I know she’d love the view," he said.

More information on the Great Falls Trailblazers can be found at www.greatfallstrailblazers.org.