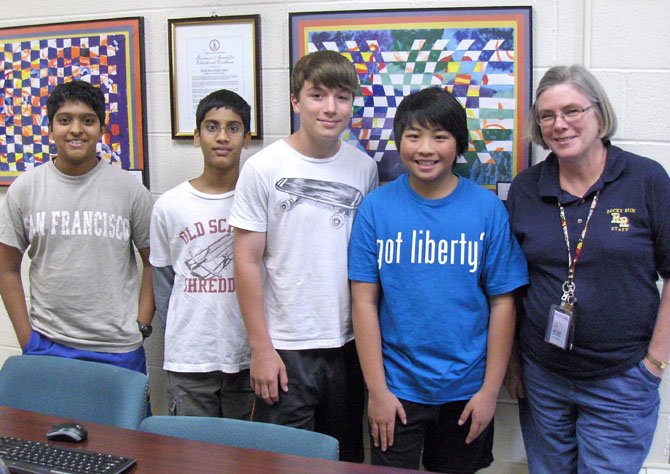 Chantilly — Not only did Rocky Run Middle School’s eighth-grade eCybermission team win the Virginia state championship, it also captured first place in the Northeastern U.S. Regionals and will compete in nationals in June.

“These students worked so hard to achieve this honor,” said their coach, Mary Erdeljon. “I am extremely proud of them and know they will do great things in the future.”

The team members are Raghav Ramraj, Hitesh Yalamanchili, Jasper Treakle and Matthew Sun, and they each won a $500 savings bond for winning states, plus $1,000 each for U.S. regionals.

“These four will do some great things in life,” said Principal Matt Eline. “We’ll read about them later on in national magazines and will all go, ‘Yeah, we knew them when.’ And I’m the lucky, middle-school principal to have them in his school.”

ECybermission is a science competition. “You do an experiment and research, but the most important part is reaching out to your community to help them,” said Jasper. Added Matthew: “You find a problem in your community and use science to tackle it.”

“And we actually see some worldwide benefit,” said Raghav. They asked people their opinions and knowledge of geothermal heating and cooling, and some of their surveys reached Australia, India and Europe.

Some of the boys began working together in sixth grade. “A couple years ago, we started researching toxins in plastics and figured out by heating them the different plastics in which BPA was present,” said Raghav.

“We got a testing kit from Israel and determined that No. 7 plastic was one of the worst ones because it had the highest concentration of BPA,” said Jasper.

This year, said Hitesh, “Our project was finding a more efficient way of heating and cooling houses, and we found geothermal heating and cooling to be best.” To make it possible, said Matthew, “A pipe runs from the house into the ground, exchanges heat from the ground and brings it into the house to either cool or heat it.” And that depends on what season it is, Raghav added.

“The startup costs are expensive – $20,000-$30,000/house,” said Jasper. “But in 10 years, you’d save money.” And, said Hitesh, “It’s environmentally friendly because it doesn’t hurt animals and insects that live underground.”

Matthew noted, as well, that installing these pipes increases the firmness of a home’s foundation. That’s because “the hole dug for the pipe is filled with grout,” said Raghav. “This makes it airtight so it can exchange heat the best,” said Jasper.

They also examined the effectiveness of geothermal heating and cooling in different seasons. “We built a model in an aquarium, put in plastic piping connected to a water pool to simulate the home’s temperature and poured in soil,” said Matthew.

“Then to get the soil to simulate the earth’s temperature, we poured either boiling or cold water on the soil to either heat or cool it,” said Hitesh. Next, said Matthew, “We pumped water through the piping in the soil to change the water temperature as it came back from the soil, and we measured that temperature.”

Jasper said they took the temperature every two minutes for 20 minutes to see the data trends and overall temperature change. “We concluded that the geothermal system is effective in both summer and winter, but it was more effective in summer because it cooled the temperature by 53.6 degrees,” said Raghav. “In the winter, it was just 39.2 degrees.”

So, added Matthew, “You’d have to use a heat pump to raise the room’s temperature to 70 degrees.”

Coach Erdeljon said eCybermission is sponsored by the U.S. Army to promote science, technology, engineering and math. Researching, building, testing, filling out information for their mission folder and analyzing the data took the team a few months. The actual experiment took two weeks.

“We wrote documents and took photos of what we did,” said Jasper. “And we made experimental-design diagrams.” The boys also had to answer questions from the judges during the competitions. Erdeljon said the judges focus on their teamwork, too.

Competing against more than 1,000 other middle-school teams in Virginia, they submitted their project online Feb. 24 and found out April 1 that they’d won the state championship.

Then on April 19, they competed in the Northeastern U.S. Regionals, and Raghav called it “exhilarating” vying at that level. “We presented our project, answered questions and submitted an abstract describing what we did,” said Jasper.

Last Monday, April 23, they learned they were again champions and were thrilled with this victory, too, because it means they’ll now compete in nationals in June in Washington, D.C.

“I was excited that all our hard work and reading paid off, and it’s nice to know I’m doing something to help the community,” said Jasper. Matthew, however, was particularly happy to win states.

“In sixth grade, we got second place in a different category, and third place in seventh grade,” he explained. “So to finally get first is vindication and justification of our hard work every year. And I’m really happy to let our community know about geothermal heating and cooling.”