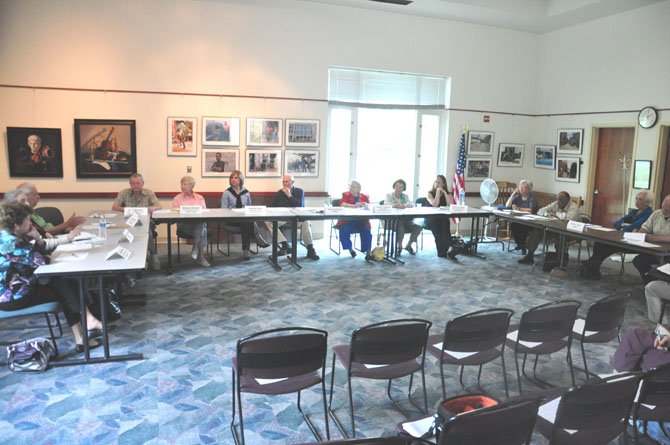 Great Falls — The Great Falls Citizens Association’s Seniors Group hosted their meeting with new membership Wednesday, May 2, as group mainstays were joined by representatives from local churches and Fairfax County. The group, which was founded last year and has been seeking input from local residents, started planning their first event and laid out plans for a year’s worth of events, starting this September.

"Our vision is to establish a Great Falls Senior Center, based on the Burke-Springfield Senior Center Without Walls," said Bob Lundegard, an original member of the group. "They’re a group of people that doesn’t have a dedicated building, but they host regular events and activities for seniors."

Lundegard said the group reached out to the faith community since Great Falls lacks a formal community center, churches are well equipped to handle groups of people. The Great Falls Library’s rooms are often booked and the Grange is not compliant with the Americans with Disabilities Act, so both of those do not meet the need.

THE SENIORS GROUP met with every member of the Great Falls Ecumenical Council, a group that includes eight local Christian churches.

Last year, Fairfax County budgeted for $70 million to fund senior citizens activities, none of which went to Great Falls.

"It was shocking to see that Great Falls doesn’t have these services, and I was needling [Supervisor] John Foust [D-Dranesville] about it, and he said ‘if you don’t ask, you won’t get,’" said Wayne Foley, a member of the group and GFCA board member.

Linda Fernald, another early member of the group, said she and her husband have three living parents between them, ages 98, 95 and 91, and that caring for them made them see the lack of resources in Great Falls.

"We realized that there just aren’t any local programs to help socialize seniors or meet other needs, and we need to have that," she said.

Carol Blackwell and her family have experienced the kind of situation that the Seniors Group hopes to rectify. Several years ago her husband was diagnosed with early onset Alzheimer’s.

"It was devastating, he had no one to talk to, and even though there are millions of people with the disease, we didn’t feel connected to any of them," she said. "Here in Great Falls, we hope to find people who have struggled with what we’ve struggled with and connect them to people and resources."

Blackwell helps run the Alzheimer’s Association National Capital Area Chapter’s Memory Café, a social meeting that connects those suffering from cognitive diseases and their caregivers with others in the same situation.

Joy Trickett, a member of the Dranesville Church of the Brethren, said she knows of many people who could use the group’s services and would take advantage of future events.

"There’s a lot of elderly widows and widowers who have been left behind in Great Falls, who want to stay here, but don’t have the friendships to keep them active," she said.

Madelyn McCabe said she attended because her and her husband "love our house and love this community, and we’d like to age in place."

The Seniors Group hopes to hold their first event in July, which will honor 50 Great Falls residents who have lived here for 50 years or more.

After July’s event, they hope to hold a monthly event, for about three hours in the middle of the day, starting in September and for at least a year. The budget for each event will be about $500, Lundegard said, enough for lunch, transportation and a small amount going to the host building.

THEIR NEXT STEP is to become chartered by the Fairfax County Board of Supervisors as an official group, and they are currently drawing up their proposal to submit to Supervisor John Foust (D-Dranesville).

Jennifer Duarte of the Fairfax County Department of Neighborhood and Community Services, said there are a variety of services the county can provide.

"We can help get grants, bring in speakers from the police, fire department and AARP, as well as bring in instructors for events like line dancing, Pilates and yoga," she said. "Once we figure out this community’s specific needs, there will be a lot more opportunities. We know there is a significant need here, the closest Senior Center in Herndon, and many seniors just can’t make it that far."

"This is our chance to create a lasting, significant institution in Great Falls, one that will enrich the life of older adults, a community that is getting larger," Lundegard said. "We want to make sure the group is around in five to 10 years, we’re going to need a constant supply of new energy, people and ideas."

The GFCA Seniors Group meets at the Great Falls Library, the next meeting will be Thursday, June 14 at 1 p.m. Their first event is currently scheduled for July 11 at 11 a.m.

They are also holding a survey online to gauge the needs of seniors, families and caregivers and can be found online at www.surveymonkey.com/s/GFCA.