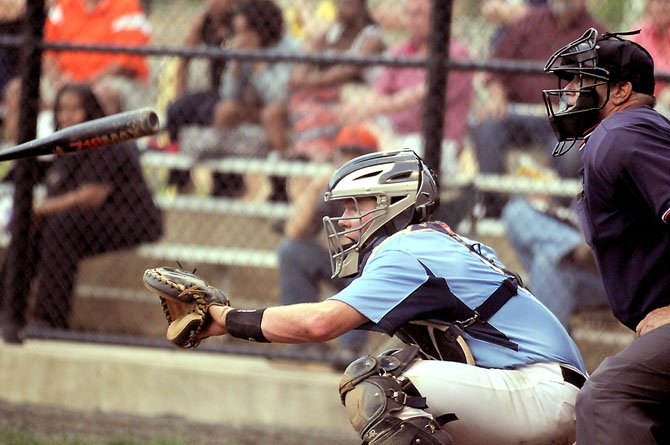 Yorktown catcher Red Dowdell drove in the game-winning run on May 4 against Hayfield with a double in the bottom of the seventh inning. Photo by Louise Krafft.

Arlington — Yorktown catcher Red Dowdell attempted to block home plate in the top of the third inning during the Patriots’ May 4 showdown with Hayfield, but Hawks center fielder Robert Banks slid under Dowdell’s tag to score the first run of the game.

On the play, Banks’ spikes caught Dowdell’s pants and ripped them along the crotch. Unaware of the tear, Dowdell couldn’t figure out why his teammates were laughing when he returned to the Yorktown dugout.

"I didn’t even notice my pants were completely torn," Dowdell said. "Everyone started laughing and I’m like, ‘What’s going on? Did I do something wrong?’ They’re like, ‘Your pants are completely open in the back.’"

Dowdell quickly taped his pants — though it didn’t help much — as he was due to hit third in the inning. After hearing laughter from fans who saw the tear, the left-handed-hitting senior grounded out to first base as Yorktown’s offensive struggles continued against Hayfield pitcher Cameron Lundmark.

"That’s the difference between a great, consistent high school hitter and someone who’s not quite as successful as someone like Red. He can do it at any count. Most other guys are learning to hit with two strikes. Red is a little bit ahead of the curve."

After the at-bat, Dowdell changed into a pair of practice pants teammate Paul Vaselopulos happened to have in his bag. A few innings after solving his equipment issue, Dowdell and the Patriots solved Lundmark.

Dowdell’s fifth-inning RBI triple tied the score at 1-all and his seventh-inning double off the center-field fence plated the winning run as the Yorktown baseball team defeated Hayfield 3-2 at Greenbrier Park. The victory, along with a Stuart loss to Washington-Lee, assured the Patriots of the National District’s best record and the No. 1 seed in the district tournament. Hayfield and Stuart were tied for second.

"We made all the plays. We went after it," Yorktown head coach Mike Ruck said. "We didn’t play that game to lose."

Dowdell, who will play for VMI next season, made two of the biggest plays of the evening for Yorktown, driving in a pair of runs with extra-base hits — both of which occurred on full counts. With two outs in the fifth inning, Dowdell, after fouling off a pair of two-strike pitches, hit a line drive that skipped past the Hayfield center fielder and scored Ben Criswell, who reached on a single.

In the seventh inning, after Criswell led off with his third single of the evening, Dowdell smashed the ball off the fence in center field, driving in the winning run. 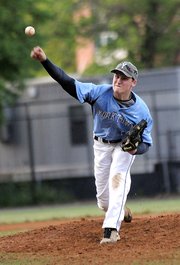 Yorktown pitcher John Yoest earned a complete-game victory against Hayfield on May 4.

"With two strikes, he’s comfortable," Ruck said. "That’s the difference between a great, consistent high school hitter and someone who’s not quite as successful as someone like Red. He can do it at any count. Most other guys are learning to hit with two strikes. Red is a little bit ahead of the curve."

With a chance to win the game, No. 5 knew he hit the ball well.

"I had that feeling off the bat like I almost didn’t even hit it," Dowdell said. "Whenever you hit a ball like that, you know it’s going a long ways."

While Dowdell and Criswell provided the offense, starting pitcher John Yoest held the Hayfield lineup in check for most of the contest. Yoest earned the complete-game victory, allowing two runs on seven hits while walking two and striking out seven in seven innings. The junior right-hander credited the Patriots’ defense, which did not commit an error.

"When you have defense playing like that, it takes all the pressure off the pitcher," Yoest said. "… I can pound the [strike] zone. It was really a great effort by our defense."

Yorktown will host a first-round game in the National District tournament on Tuesday, May 15. Friday’s victory over Hayfield helped ensure home-field advantage throughout the tournament — and showed Dowdell he might want to pack an extra pair of pants.

"Honestly, that’s just the way he plays," Yoest said. "We love teasing him about it. If there’s a play at the plate, he’s willing to sacrifice his body. The way he plays just shows how much character and integrity he’s got as a ball player."