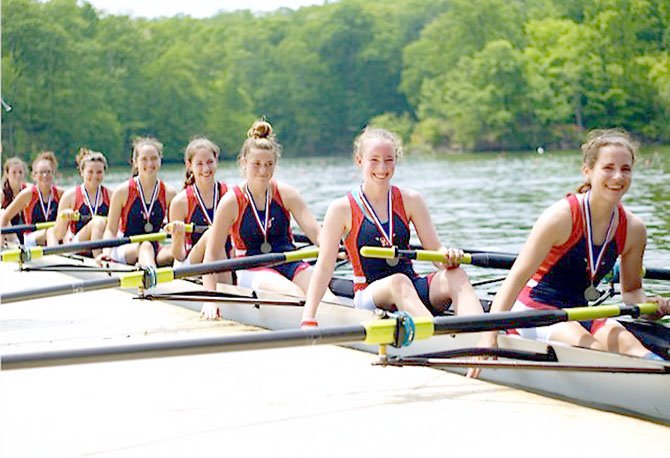 The T.C. Williams girls’ freshman 8 are seen at the dock at the Ted Phoenix Regatta on May 5 after being awarded the silver medal as one of the two top boats in the Commonwealth of Virginia. Members of the freshman 8 include (from left): Zoe Gildersleeve, Rachael Vannatta, Taylor Sanders, Maura Nakahata, Claire Embrey, Margaret McVeigh, Kyra McClary, and Maeve Bradley. Sitting in front of Bradley, just outside the picture, is coxswain Kathrina Policarpio. Photo by Azim Khodjibaev

When they began the season, the T.C. Williams girls’ freshman 8 was like any other freshman boat in the sport of rowing — unproven, untested, and unsure of how they would do. By the end of this past weekend, the TC girls’ freshman 8 was something else — one of the two best boats in the Commonwealth of Virginia.

The Titan rowers earned that honor at the Ted Phoenix Regatta Lower Boat Championship, an annual competition that is raced on the Occoquan Reservoir at Sandy Run Regional Park just south of Washington and pits third varsity, fourth varsity, freshman, and novice crews against each other to determine who has the fastest boat in the Old Dominion. The T.C. girls’ freshman 8 entered the contest with two victories in their previous three outings.

On a day when the temperature approached 85 and the humidity was even higher, the girls won their morning heat with a time of 5:40.10, which would prove to be the fastest time of any boat on the day. In the afternoon final, the Titan rowers faced a near-catastrophe at the start of the race when the boat in the lane next to them veered in their direction, colliding with their oars, and causing them to come to a complete stop. That same boat then swerved in the opposite direction, causing the same fate for the boat from National Cathedral two lanes away. Unfortunately, regatta officials didn't stop the race, leaving the TC girls with no choice but to resume rowing.

They charged down the course and crossed the finish line with a time of 5:47.28, just two seconds behind Woodson. Their performance earned them the silver medal as one of the top two freshman boats in Virginia. It also set the stage for other top performances at regattas in the coming weeks. Members of the TC girls’ freshman 8 include: coxswain Kathrina Policarpio and rowers Maeve Bradley, Kyra McClary, Margaret McVeigh, Claire Embrey, Maura Nakahata, Taylor Sanders, Rachael Vannatta and Zoe Gildersleeve. The freshman girls are guided by Coach Pat Marquardt.

In another close race that was marked by a strong performance by a Titan boat, the T.C. Williams boys’ freshman 8 — who came in second in their morning heat behind eventual winner Washington-Lee — narrowly missed capturing the bronze medal in the afternoon final when they crossed the finish line .27 seconds behind St. Albans, who came in third with a time of 5:04.68, compared to the TC time of 5:04.93. The freshman boys are guided by Coach Matt Holland.

Another gritty performance by a T.C. Williams boat was turned in by the girls’ novice 8, who came within a hairsbreadth of the making it to the final when they crossed the finish line .30 seconds behind second-place Madison in a heat where only the top two boats advanced.

Other Titan boats competing in the Lower Boat Championships were the TC boys’ novice 8, the girls’ third 8 and the girls’ fourth 8, each of which performed well in their individual contests and all of which demonstrated real progress and fortitude in their first year of rowing. The TC novice boys were guided by Katie Bond and Stephanie Patton, while the novice girls were headed by Maureen Tuchowski and Matt Given, with assistance by Heather Casey, Meaghan Casey and Cathy Hott.

The T.C. Williams crew team will compete next in the Virginia Scholastic Rowing Championship for Upper Boats, which will be held at Occoquan this coming Saturday, May 12. The TC crew team is guided by boys’ head coach Pete Stramese and girls’ head coach Mercedes Kiss.

For the complete schedule and more information about T.C. Williams Crew, visit www.tcwcrew.org or www.facebook.com/alexandria.crewboosters.