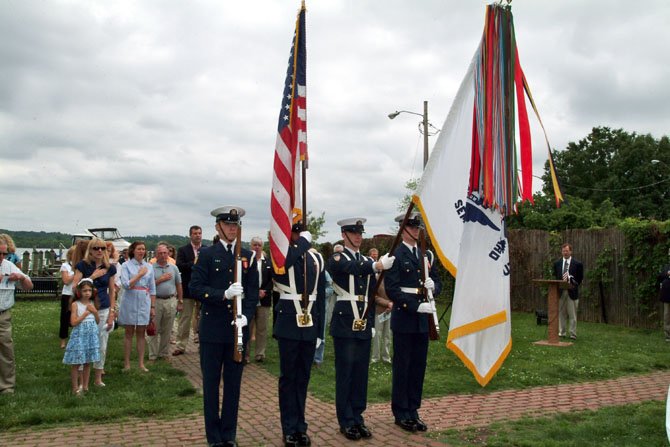 The U.S. Coast Guard Ceremonial Honor Guard presents the colors prior to the flag raising ceremony May 6 at the Old Dominion Boat Club.

The Old Dominion Boat Club welcomed members, guests and dignitaries to the foot of King Street May 6 for the 132nd annual flag raising ceremony, a yearly tradition of hoisting new flags to kick off the official start of a safe boating season.

Following the singing of the national anthem by Keith Harmon and a blessing for the safety of boaters by Father Dennis Kleinmann of St. Mary's Church in Old Town, flags of the United States, Commonwealth of Virginia, City of Alexandria and the ODBC were individually hoisted atop the gaff-rigged flagpole at 1 King St.

The ceremony concluded with a water cannon demonstration by the fireboat John Glenn on the Potomac River and was followed by a reception attended by city officials and community leaders.