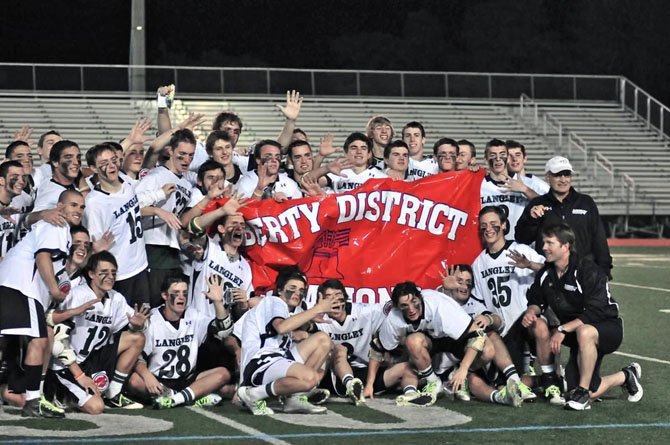 Great Falls — The Langley High Saxons captured their fifth Liberty District tournament title in as many years last Friday, May 11 in a riveting boys lacrosse contest at Marshall High School. The Saxons defeated a tenacious Madison Warhawk side that pushed the Saxons to the brink before they were able to secure a 13-12, smash-and-grab finals win for the district title.

A pair of Langley man-advantage goals - a game-tying score by senior Sean Ahearn, and the winner from senior Mike Adams - deep into the fourth quarter ultimately made the difference between the longtime Liberty team rivals who battled to the end with the prospect of overtime looming as the final horn approached.

By building an 8-5 halftime lead and scoring the opening goal of the second half to make it 9-5, the Saxons looked to be settling into a steady stride to the evening's finish line. But the Warhawks had other ideas, and exploded for six goals in six minutes that tipped the scales in their favor by two goals early in the final period.

What seemed to be an imminent shift in Liberty supremacy was put on hold, however, when strikes from Saxon senior Josh Sibio and then Ahearn erased the deficit in a two-minute span, leaving final resolution in some doubt with an 11-11 score with eight minutes remaining in regulation time. Senior Connor Strock nudged Madison ahead once again, only to see Ahearn supply his fifth goal of the game - the Langley attacker also had four assists - to tie the score at 12 apiece at 3 minutes, 47 seconds showing on the clock. The game-tying score came early in an extra-man opportunity that came out of a slashing infraction during a dangerous build-up by the Saxons on the counter-attack.

Warhawk junior Kyle Rowe, who excelled in the center spot re-starts throughout the night, thought he had given his side the lead again right out of the ensuing face-off. But the apparent goal was nullified when the middie was judged to have entered the crease area before the ball had gone into the net.

However, Madison had a one-minute man advantage at the 1:31 mark due to an illegal body check call on Langley. But the Saxon defenders kept their composure and limited their opponent to a single shot attempt during their man-down situation.

An off-sides infraction yielded a 30-second power play for Langley, although only 19 seconds were needed for Adams to snap in a score from eight yards, allowing the Saxons to go ahead 13-12 in what would prove to be the game-winner.

The Warhawks generated one last good look in their bid to level matters but the goal-bound shot by junior middie Matthew Arndt was kept out by Langley senior goalie Andrew Spivey. The Saxons then literally ran out the clock with controlled possession during the remaining time.

IN ADDITION TO AHEARN'S five goals and the Sibio score, Langley got four goals from Adams and solo strikes from senior middies Slater Howell and Clay Rivers, and from sophomore attack/middie J. T. Meyer.

Strock joined attackers Kyle Mancini, a junior, and Brett Simeck, a sophomore, in supplying single goals for Madison, which also had junior goalie Matt Hayden providing one of his own late in the opening quarter. Junior attacker Nick Gabriel and junior middie Ian Cooke did much of the heavy lifting on the Warhawks' offense with each delivering a hat-trick to go with a pair from senior attacker Kellen Schmitz.

Rowe claimed 24 of 29 face-offs in a productive performance at the center that was the engine of the Madison outburst early in second half play and an imposing threat had the battle extended past regulation time.

Spivey was credited with 11 saves while Hayden turned back eight Saxon goal-bound attempts. The netminders were sharp at important moments but the two were just as busy picking the ball out of their respective cages as both offenses had their shooting sticks in prime form for the district title encounter.

On Tuesday, May 15 of this week, Madison head coach Rich Hodge was set to lead his Warhawks (12-5 overall, 7-3 district) against 11-5 Westfield (Concorde District) in a first round game of the 16-team Northern Region tournament. Langley head coach Earl Brewer, meanwhile, was to see his top-seeded Saxons (15-2, 10-0) from the Liberty entertain Concord No. 4-seed Robinson (7-6, 4-3), also on Tuesday.