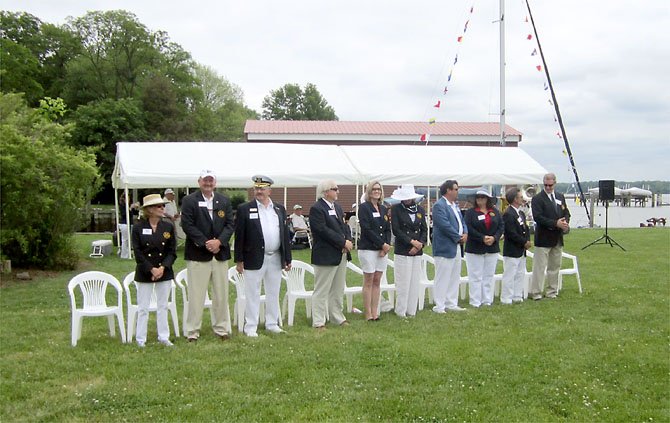 MVYC Officers bow their heads at the annual "Blessing of the Fleet," presented this year by Chaplain Ruth Walsh of St. James Episcopal Church on Old Mill Road.

Mount Vernon Supervisor Gerry Hyland knows where he will likely spend the first Sunday in May each year, and plans to drop by the Mount Vernon Yacht Club at the end of Tarpon Lane to meet and greet members and guests at the launch of the annual boating season gala.

"I've enjoyed it every year and look forward to it," said Hyland. Attending for the first time this year was Del. Dave Albo, who came with his son, and said he was surprised to see such a spectacular event presented by the all-volunteer club of 230 family memberships. The marina for 134 power and sail boats is managed by members, along with a club house and pool.

Del. Scott Surovell was unable to attend but sent a staff member Meghan Howard who spoke about his commitment to protect the Potomac and its environment.

Captain Scott Smith noted that the Fire and Rescue Operation has managed to keep afloat despite threats of budget cuts and thanked Hyland for his support.

Chaplain Ruth Walsh of St. James Episcopal Church, a former military chaplain, commended MVYC for its role and example of volunteering in the community.

Commodore Ron Reinsel noted the history behind the rite of Commissioning Days and Blessings of the Fleet. He stressed how these traditions keep the boating spirit alive in the community. Past Commodore Bonnie Breneman served as master of ceremonies for the event, which concluded with a race by the Mount Vernon High School Crew Team. Four crew attended the event on shore along with Coach Ryan Ward, who was presented with a $500 check from the club.