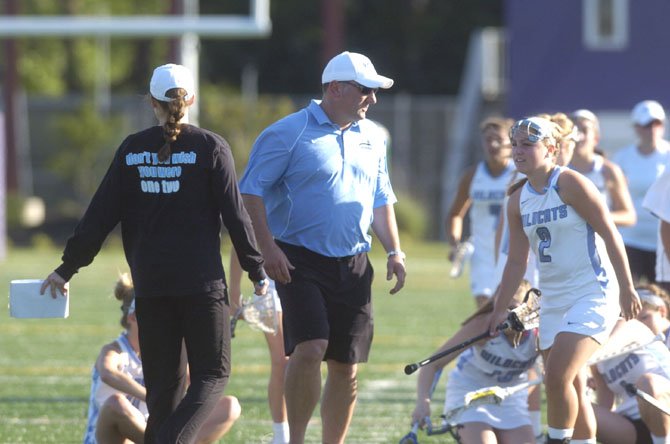 Both squads played in district title games on Friday, May 11 at Chantilly High School, the host site of both the girls' and boys' tournaments. The night, however, belonged to Oakton High which saw both its teams (girls and boys) earn district championship banners.

Westfield, the No. 2-seed of the boys' tournament, earned a first round tournament bye before defeating No. 3 Robinson, 8-6, in a semifinals contest played on Tuesday, May 8. The win over the Rams advanced the Bulldogs into the finals where they were edged by underdog and No. 4-seed Oakton, 9-8.

Westfield (11-5) was hoping to erase the sting of that defeat by putting together a strong showing at this week's 16-team Northern Region tournament where the Bulldogs were scheduled to play Madison in a first round game.

On the girls' side, Centreville, enjoying its best season in 11 years, was the regular season district champion, thus earning the No. 1 seed at the district tournament. Following a first round bye, the Wildcats defeated No. 4 Robinson, 17-6, in a district semifinals game on May 8. That triumph advanced them to their first district finals appearance since 2001. Centreville, in Friday's championship game, fell short in its quest of the district crown, falling to No. 2 Oakton, 14-7.

The Wildcats, on the heels of their district finals appearance, were scheduled to meet Marshall in a first round region playoff game this week.

THE CENTREVILLE GIRLS had beaten Oakton, 14-13, during the two teams' regular season meeting on April 13 at Oakton. The defeat for the Cougars was one of just two they experienced during the regular season.

But in Friday's district title game, Oakton, the defending district champions, played an exceptionally strong game in all areas throughout the 50-minute contest and beat the talented, younger Centreville team.

"Oakton showed its senior leadership," said Centreville head coach Brian Newell, whose Wildcats (13-2) were playing one of the biggest games in the history of the program. "This is [our players'] first big game and we had some big game jitters. Oakton played great. We're pretty young. We fought to the end. But we didn't keep possession and Oakton got too many ground balls."

Oakton head coach Jean Counts, whose team went all the way to the state finals last year before losing to Madison, said her team played a terrific all-around game.

"The last time we played Centreville we didn't do any of the basics," said Counts, recalling the April loss to the Wildcats. "I thought Centreville definitely had the best defense in the district when we played them before. We matched that [in the title game]. Our whole defense played together."

From the start of the game, Oakton's defense was clicking as Oakton players helped one another out in coverage and aggressively pursued the ball. When the Cougars stopped the Wildcats by forcing turnovers or missed shots, their transition game to the offensive end was crisp and often led to fast break opportunities. By the end of the first half, Oakton had built an 8-2 lead. Centreville continued to play hard throughout the remainder of the game but never seriously threatened to close the gap in the second half.

"We won the district last year," said Oakton senior attack Jackie Rupp, who scored a game-high five goals in Friday's title game win. "This year we have 11 seniors and brought the championship to a new level. The last time we played Centreville [in the regular season meeting], defensively we didn't do well. Today I think our fast break was real good. Centreville is very fast and aggressive compared to most teams and will capitalize on your mistakes."

But Oakton simply did not make many mistakes against the top-seeded Wildcats in the finals.

Centreville, which finished 5-7 and 6-7 the past two years, has put it all together this season, despite having a young roster which consists of just three seniors. Coach Newell believed the Wildcats were going to have a great season, and they have.

"One of our goals coming into the season was to make it to regionals," he said. "I'm real proud of my kids."

Centreville lost just one game during the regular season — a 7-5 defeat at the hands of fellow Northern Region member Marshall High over spring break in Florida. The Wildcats were a perfect 5-0 versus Concorde opponents in the regular season.

THE WESTFIELD BOYS, in Friday's nightcap of the girls-boys' championship double-header, made a strong, late game run at Oakton after falling behind 7-4 in the third quarter. The Bulldogs even took the lead with just over nine minutes remaining but could not hold off the underdog Oakton team.

Oakton's Jack Harris, a junior attack, scored what proved to be the game-winning goal when, upon receiving a short pass from senior teammate Sean Schweiker, he sent a close range shot into the net off the left corner with about 90 seconds remaining in the final quarter. The tally broke an 8-8 deadlock.

The contest was close throughout with both teams playing outstanding defense most of the way. At halftime, the Cougars held a 4-3 advantage. In the third quarter, Oakton scored three goals to Westfield's two and took a 7-5 lead into the final quarter.

Several minutes later, Oakton, on a man-up advantage, tied the game on a goal by junior midfielder Jeremy Marshall with 5:26 remaining to make it 8-8.

Over the next several minutes, Oakton continued to apply pressure with Michael Gillooly, a senior midfielder, getting off two excellent attempts, both nicely blocked by Westfield net minder Tucker Winfrey.

Oakton finally went ahead for good on the score by Harris.

Oakton (11-6) had lost to Westfield in the two teams' regular season meeting on April 27 at Oakton.

The Cougars entered the six-team district tournament as the No. 4-seed. They defeated No. 5 Centreville in a first round game to advance to the semifinals and clinch a spot at this week's 16-team Northern Region playoffs. Then, in a district semifinals game, Oakton upset top seed Chantilly. And the Cougars pulled off another upset in the finals with the win over No. 2-seed Westfield.

"They're peaking at the right time," said Oakton third year head coach Grif Barhight, of his squad. "I just think they believed they could get it done. One of our goals was to win the district championship."