Rare lawsuit pits city officials against their own board. 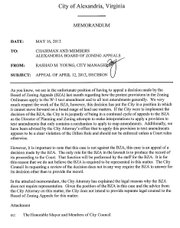 What happens to members of city boards and commissions who get sued by the city government? It’s an awkward question, one that Alexandria now faces in the Alexandria Circuit Court.

“We don’t envy suing any of our appointed boards or commissions,” said Mayor Bill Euille. “In my tenure of 18 years on the City Council, I believe this is the first time we have ever done such.”

Earlier this month, city officials filed an appeal to a decision issued last month by the Board of Zoning Appeals. That decision, rendered in a late-night meeting, overturned Planning Director Faroll Hamer’s determination that property owners in Old Town were not able to file a protest petition requiring a supermajority vote to pass the controversial waterfront plan.

“This appeal is absurd,” said Bert Ely, a member of the waterfront work group. “The city will have to pay additional thousands of dollars in fees to provide legal counsel to the BZA since it is among the main respondents in the city’s appeal.”

“The BZA does not need to have counsel,” said Banks, adding that Fairfax County took a similar position in a recent case. “It is the city’s position at this point that we will not incur the expense of providing them such outside counsel.”

Ely and others have also suggested that suing the BZA is unnecessary because the city can always change the part of the code in question. That way, the decision does not set a precedent and the city could avoid taking its own board to court. Again, Banks disagrees, saying the suit is necessary to set the record straight.

“The city is just simply in a position where we’ve got to clarify that as an underlying matter,” he said. “Otherwise, we’ll be in an endless cycle of litigation.”