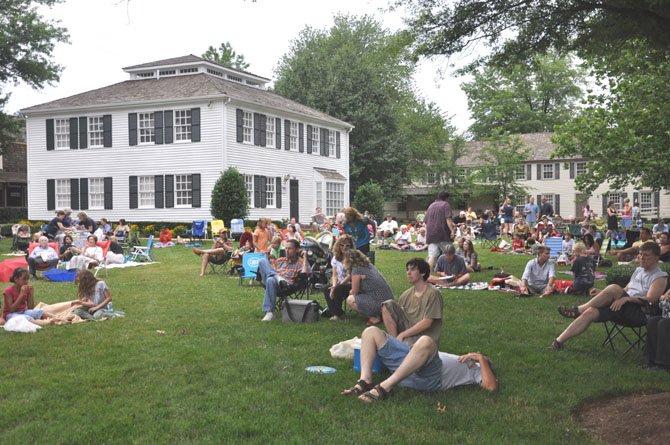 The crowd at the Great Falls Village Green takes in the one of the annual Concerts on the Green, which will kick off Sunday, June 3. Photo by Alex McVeigh.

Great Falls — During the first weekend of June traditions old and new will be taking place throughout Great Falls. Cars and Coffee, the Concerts on the Green and the annual Golf Tournament to benefit local elementary schools will all be taking place, as well as a few new elements.

After Cars and Coffee from 7 to 9 a.m. Saturday, June 2, the Langley High School varsity baseball team will face off against Langley alumni from years past.

"In the 1930s, the Great Falls Spring Festival was a baseball game," said Sandra Even of Celebrate Great Falls, one of the coordinators of the events. "We’re trying to make sure we get as many people as possible involved. Great Falls Little League will be there selling food and drinks, the Great Falls Historical Society will have a uniform from the 1890s and other memorabilia." 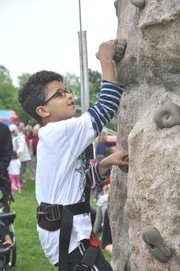 Jim Mraz, who is helping coordinate the game, says that he’s gotten a good response from the alumni he’s recruited for the team.

"Everyone’s definitely feeling a little competitive, but in a fun way," he said. "The alumni team has some guys who are more into having fun, and some who are staying serious."

Mraz also said he hopes the game can serve as a catalyst to establish a Langley High School baseball alumni program that will connect multiple generations.

"We hope that everyone who comes out will really feel part of a family, because they’ll all have something in common, playing baseball for Langley," he said. "Hopefully we have success and keep this as an annual thing."

THE LANGLEY VARSITY BASEBALL team versus Alumni game will take place from 2 to 5 p.m. Saturday, June 2 at Nike Field 5.

On Sunday, June 3, the Village Centre Hill (behind the Post Office) will host the June Fest festival, which will feature an assortment of carnival games, rides, community organization booths and local businesses.

June Fest will feature rides for all ages, including the first-ever use in Great Falls of a mechanical ride and a five-person climbing wall. It will take place from noon to 5 p.m. 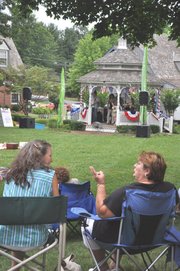 From left, Lynette Terpak and Daria Powell have a conversation while watching Diamond Alley perform at the Summer Concerts on the Green series. This year’s series kicks off Sunday, June 3.

The festival will segue into the inaugural edition of the Concerts on the Green, the weekly musical series that takes place during the summer on the Village Green.

The opening night will feature The Shields Brothers, a pop group recently featured on NBC’s "The Voice."

"We decided to move up the start time for the first concert only, because we want to make it easy for people who decide to spend some time at June Fest, and then want to catch the concert," Even said.

FUTURE CONCERTS ON THE GREEN will take place every Sunday until July 29 from 6 to 8 p.m.

Wrapping up the events on Monday, June 4 will be the annual golf tournament to benefit Great Falls, Colvin Run and Forestville Elementary Schools.

Taking place at the Hidden Creek Country Club in Reston, the tournament will have morning and afternoon shotgun starts, and admission includes a four-person scramble, lunch or dinner and awards.

"This is our fifth year of the tournament, and its grown to encompass more schools and more people every year," said Tim Burke, one of the coordinators for the tournament. "We’re trying to raise funds to supply the school with things they don’t get from the county."

Last year’s tournament raised $18,000, which was distributed evenly between the three schools.

Spots are still available for the tournament, and Celebrate Great Falls is seeking volunteers for events throughout the weekend. More information about volunteering, registration and schedules can be found at www.celebrategreatfalls.org.