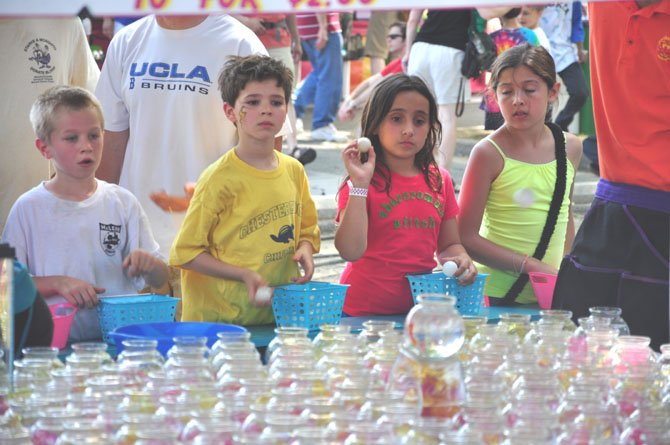 Children throw ping-pong balls for a chance to win goldfish at McLean Day, Saturday, May 19. Photo by Alex McVeigh.

McLean — While Enid Tate of McLean enjoys going to McLean Day to check out the local businesses, live music, carnival rides and other staples of the annual festival, her two daughters come for only one thing. 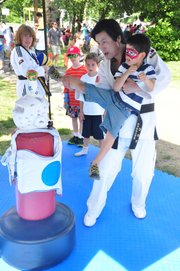 S.H. Kim shows Tristan Farmer, 4, how to deliver a flying kick during a Tae Kwon Do demonstration at McLean Day Saturday, May 19.

While Tate and her daughters had their goals clear in mind before they got to Lewinsville Park, there was plenty at the festival for all to enjoy. While the baseball field was turned into an archery tag arena, the parking lots and paths were turned into booths featuring local organizations and businesses.

"It’s sort of a way to see who’s who in McLean, because the groups that come here are really plugged into what’s going on with the people," said Harold Randall of McLean. "I know that we’re all sort of on the same team, when they come to events like this, hopefully people will get to know them and support them in the future."

The parking lot closest to Chain Bridge Road was filled with carnival rides for all ages, where the younger children could ride the Tilt-a-Whirl and the more daring guests could defy gravity on the Zipper.

"It’s too much for me, but this was the first year my son wanted to ride it, so he twisted my arm," said Karin Sans of McLean. "I’ll spend the rest of my time right side up from now on, thank you."

Her son Erik, 15, said he couldn’t wait to get back on line.

"It was pretty awesome, and I have to admit, it was fun torturing my mom a little bit by spinning the car as much as I could," Erik Sans said.

Scott Ramminger and the CrawStickers perform at McLean Day Saturday, May 19.

For others at the festival, the live entertainment was the highlight.

"I’ve always like ‘Mutts Gone Nuts,’ it’s something I look forward to every year," said James Hood of McLean, referring to a dog stunt show that performed twice during the day. "I also like seeing the [McLean Community Center program] Joy of Dance kids out there, it’s fun to watch such talented young people."