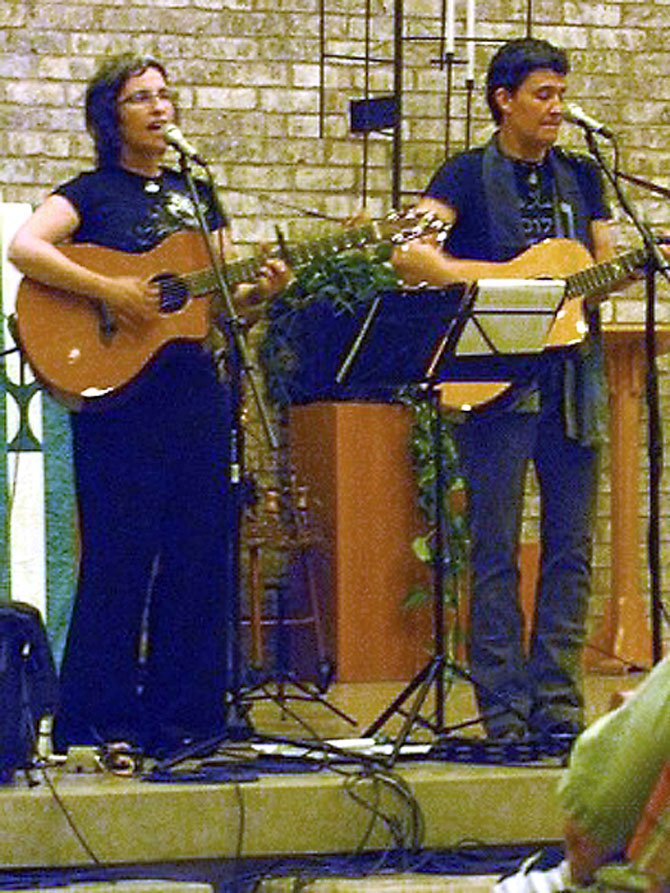 Sandy O and Pat Humphries of Emma’s Revolution perform at the Unitarian Universalist Church of Arlington.

Arlington — Activist musical duo Emma’s Revolution performed a benefit concert May 18 at the Unitarian Universalist Church of Arlington to raise funds for the church’s youth group to attend the UUC’s General Assembly.

The General Assembly is a national meeting of the Unitarian Universalist Church, where members discuss the budget, attend workshops and listen to speakers.

Emma’s Revolution is a folk duo with songs that deal with various social and environmental issues, such as marriage laws and global warming. Comprised of Sandy O and Pat Humphries, the two are currently on tour for the release of their album “Revolutions Per Minute” and have been performing benefit concerts for various issues.

Sandy O said that, when she and Humphries travel, they avoid hotels and stay with people in the community and meet with organizers for each issue.

“And so we get to have friends all across the country and also really tap into what’s happening at any particular town,” Sandy O said. “It’s a very connected kind of touring.”

Partway through the concert, members of the youth group spoke about why they planned on attending the General Assembly, including one member who spoke of how several of his family members had been deported.

“We’re talking about immigration,” Sandy O said, “but when we come in the door and we meet the person who’s in this community, whose life and family is being affected, it makes a difference as to what we say on stage, what kind of investment we have in talking about these issues and getting people energized to work against the really repressive immigration and the bullying on all those issues as well.”

Sandy O and Humphries are Unitarian Universalists themselves, and have attended several General Assembly gatherings. This is how one of the youth advisers for UUCA’s youth groups, Joy Cobb, met them eight years ago.

“I met them at the General Assembly when I was in Texas,” Cobb said, “and I heard them perform and just fell in love with them and then had them come and do fundraisers at some other locations.”

Friday’s concert centered on the bullying of undocumented people in the community, an issue the youth group has focused its efforts on for the past year and one Cobb said fits the focus the General Assembly will have on immigration.

Cobb also said that the subject of bullying initially arose because of suicides by GLBT youth. As lesbians, Sandy O and Humphries have had to get married in a number of states.

Humphries described what it was like for her to come out.

“It was certainly frightening before I had a sense of who I was,” she said, “but as soon as I was a little bit clearer on that, it wasn’t hard it all. It was like breathing. It was essential and just such a part of me that it didn’t really feel hard at the moment.”

Humphries said she’s sure that there are people she was growing up with that have kept out of touch with her partly because of her coming out, but she also said most people knew her well enough to see that she was still herself.

According to Cobb, this year’s General Assembly will have more of a focus on work within the community. The youth group will help register voters and make meals for people who are standing witness or doing work the youth may not be allowed to participate in because of their age. The General Assembly is in Phoenix, Ariz., June 20-24.

The concert was attended by members of the church’s congregation as well as people from the community.

“I think they can connect to people in ways through music they can’t with just words,” said Sally White, who had not heard of Emma’s Revolution.