Patrick Henry Drive is the first project; many will follow in coming months. 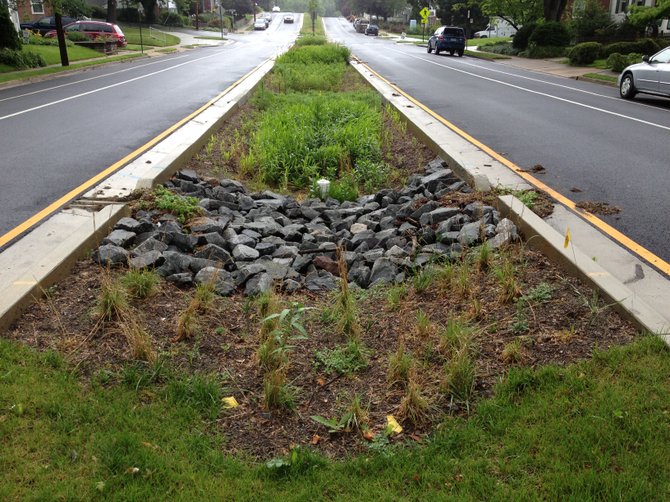 This bioretention area is the first of many to be installed across Arlington County.

Drivers along Patrick Henry Drive can see the Arlington County’s latest attempt at combating pollution from stormwater runoff. From the road, it may look like a few rocks and plants in the median. But county officials say the bioretention system is a “green streets” project aimed at absorbing and retaining pollutants rather than sending them into to Chesapeake Bay.

“The right of way seemed like an obvious place to look to make stormwater improvements,” said Jason Papacosma, watershed programs manager for Arlington County. “That’s where the county has the most control.”

The green streets project on Patrick Henry was the first, followed by a similar model on North Albemarle Street. And many more are expected in the coming years. A dozen projects are being designed now. And this summer, county officials will complete a master plan that could have as many as 1,000 potential green streets projects.

“There’s really not a lot of ways to handle pollution from stormwater runoff,” said Tyler Wilson, president of the Waverly Hills Civic Association. “Basically, you have to either treat it or retain it.”

LIKE EVERY OTHER jurisdiction across Virginia, Arlington County is looking for ways to reduce pollution from stormwater runoff — and not just because it’s good for the environment. The Environmental Protection Agency has strict new rules for how much pollution can be dumped into the Potomac River. As a result, Virginia regulators will have more stringent requirements for stormwater permits that will be issued later this year. It’s an issue that’s caused some friction between the commonwealth and Washington.

“The rush to completion is cause for concern in local governments and the private sector and does not reflect the actual time it takes to develop and implement strategies,” wrote Secretary of Natural Resources Douglas Domenech in a March 30 letter to the EPA. “It is impossible for the commonwealth to develop a plan to meet pollution goals through 2025 if the plan is developed under one set of efficiencies and evaluated under another.”

Domenech and others are concerned about what kind of modeling will be used to evaluate performance, a debate that’s still playing out in Richmond and Washington. Meanwhile, on the streets of Arlington, stormwater will be treated in the medians of roads that are wide enough to accommodate bioretention areas, commonly known as rain gardens.

“Some of the pollution is absorbed by the plants,” said Papacosma. “And some of it is retained and slowly released.”

THE GREEN STREETS have special curb cuts that allow water to flow from the gutters directly into the median. From there, they are filtered through rocks into an area where plants can absorb some of the pollution. The bioretention areas have special soil that is more porous than the clay soil found in most parts of Arlington. Beneath all that is an “underdrain,” a perforated pipe that can direct the stormwater instead of simply sending it to the catch-basin.

“We’ve been planning to reduce our stormwater pollution output for the last three years,” said Papacosma. “So this is something that’s been in the works for some time now.”