A story for Memorial Day. 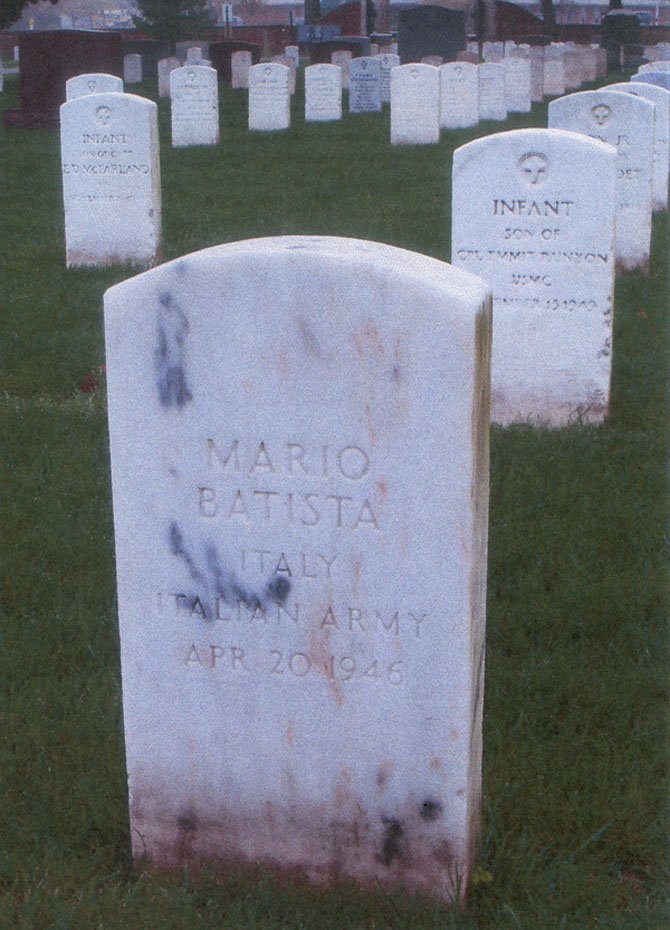 Arlington — From its beginning, "enemy combatants" have been buried in Arlington National Cemetery. It started with Confederate soldiers. However, most people have forgotten to look upon them as the enemy.

The graves, in Sec. 15-C, are together about 200 feet from the "West Gate" separating Fort Myer from the Cemetery.

Fifty-eight "friendly" foreign military personnel have been laid to rest among America's honored dead. During our wars, especially both world wars, many people in allied uniforms were stationed in the United States. It was inevitable that some would die here. Whether or not possible to return remains to their homelands, some were granted the privilege of burial in Arlington. They range from British Field Marshall Sir John Dill, whose large monument is not far from the Kennedy Graves, to the only Greek, Airman Emmanuel Boulassikis.

A little-known subset of three "enemy" soldiers who died as prisoners of war also are buried in Arlington: One German and two Italians captured during World War II. They were among hundreds of thousands brought to the United States, and more than a few died in captivity. The Geneva Conventions governed treatment of prisoners, and the United States honored those rules in hopes that its enemies would treat American prisoners decently. Those captured could not be forced to work in war industries. However, they could be permitted to work in agriculture, for modest pay, if captors decided they presented no risk to the neighborhood and likely would not try to escape. So it was with the German and both Italians.

The personalities of these individuals are unknown because, at war's end, virtually all records of prisoners were transferred to military authorities in their home countries through the International Red Cross. The National Archives has boxes of records dealing with administration of prisoners and prison camps, but a paucity of information by named individual. Cemetery files provide little more than name, nationality, date of death and grave location.

The German Embassy and the Italian Embassy in Washington provide no information about the three individuals and only suggest contact with specialized files centers at home, a process that takes months (or years) and is tightly bound by "privacy" rules, apart from language hurdles.

The known facts about the trio, therefore, are brief. Mario Batista and Arcangelo Prudenza were captured in North Africa, and Anton Hilberath appears to have been taken there also. Permitted to do farm work, the three were placed on Maryland's Eastern Shore. Each fell ill and died. Geneva Conventions prescribe that prisoners should be "honorably buried," which is understood to mean about the same quality of care as would be provided for the captor's own soldiers.

Arlington was the nearest military cemetery. Likely viewed as a routine administrative matter under the Conventions, all three were interred not far from the low stone wall separating the cemetery from Fort Myer.

In one case, at least, the soldier is not forgotten. On the second Sunday before Advent, its embassy advises, Germany celebrates "Volkstrauertag," which means "the people's day of mourning." If a soldier's grave is in foreign soil, a military attachÈ places the floral display. Hilberath, therefore, is remembered each year. The Italian Embassy could provide no information on whether a similar gesture is afforded its soldiers who fell while in service.

Since Arlington is the final resting place of so many of U.S. heroes, there can be no question that Batista, Prudenza and Hilberath have been "honorably buried."